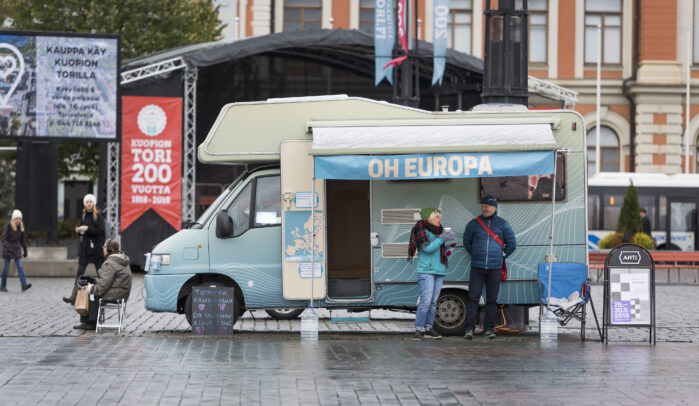 Action Hero are travelling to Kuopio with their Oh Europa camper van already for the second time. This time, the artists will compile a sound journal on their journey between the Homo Novus Festival in Riga and ANTI Festival in Kuopio.

In addition to festivalgoers in Riga and Kuopio, people in cities such as Tallinn and Helsinki can lend their voices to the Oh Europa sound art piece, which can be experienced in 2023.

Oh Europa is a labour of love; a project that spans a continent and cuts straight to the heart.

Since 2018, artists Gemma Paintin & James Stenhouse (who work together under the name Action Hero) have been travelling through Europe, asking strangers to sing a love song. So far, Gemma & James have recorded the voices of over a thousand people, singing about love and heartbreak in 46 different languages. They have travelled over 50,000km through 33 European countries, spending more than 300 days and nights on the road living in their van, which doubles as a mobile recording studio.

In September 2022, they will make a special journey between Homo Novus festival in Riga and ANTI festival in Kuopio, recording the voices of people who live along the route singing about love. Using these recordings, they will create a bespoke digital radio broadcast designed to accompany other travellers as they journey between the two cities as part of Festival’s Path in 2023.

“ANTI Festival is undergoing a year of transformation.