In Search of Democracy 3.0

We draw your dream for the cities of the future 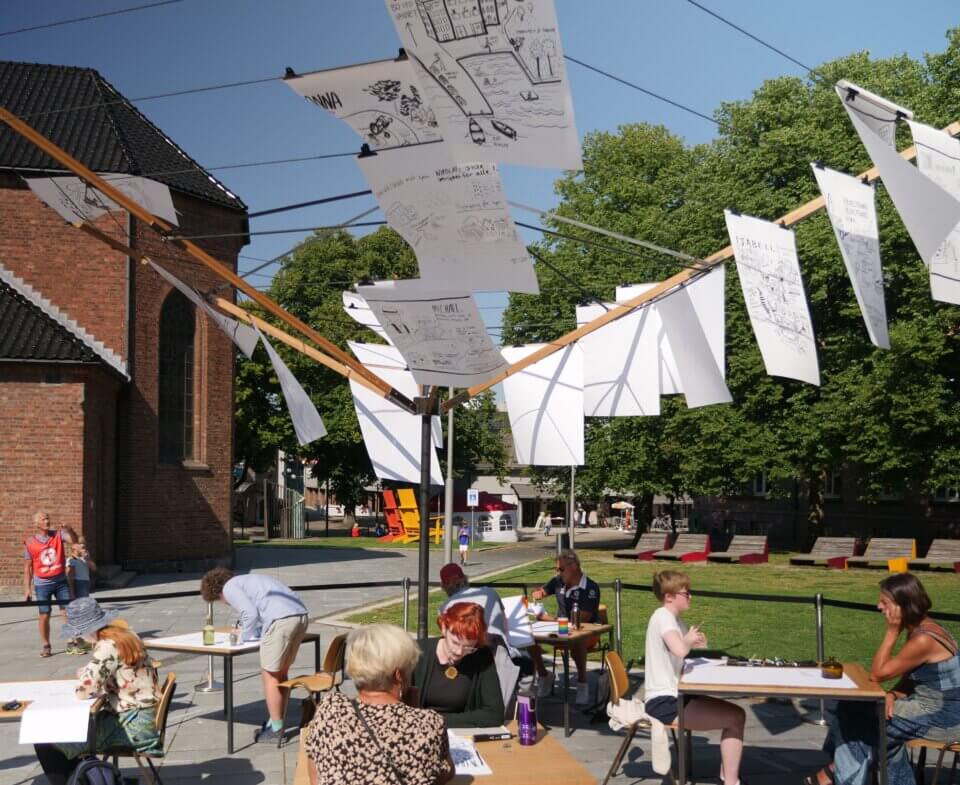 The IN SITU ACT project continues in Østfold

Can art and theater contribute to better urban development and increased participation? Yes, says Østfold International Theater and Company New Heroes, which occupies Viken with the art project In Search of Democracy 3.0.  June 2022, the project arrives in Sarpborg.

A specially designed installation is centrally located in the city - or at a school. Around the installation is a team of professional illustrators who invite you to sit down and answer a simple question:

What do you miss in the city or in the place where you live?

Each call results in a drawing that is immediately hung up in the installation.

On the drawing board, anything is possible

This form opens up for thinking freely about the future: On the drawing board, anything is possible! Collectively, the drawings represent a diversity of ideas, dreams and wishes for the society of the future. They are exhibited in the installation and later in various places in the city's public spaces and via other surfaces. ( The theater has, for example, published a coloring book with dreams for Moss, which can be ordered free of charge here. ) Finally, all the illustrations will also be delivered to the municipality and the responsible developer.

Previously, people in Drammen, Fredrikstad, Moss and Hole have been able to have their thoughts and wishes for the society of the future illustrated by professional illustrators. In 2022, the installation will come to Sarpsborg and to new areas in Fredrikstad. In addition, In Search of Democracy 3.0 will be carried out as a pilot project in upper secondary schools in the school year 2021/2022.

In Search of Democracy 3.0  is based on a concept of the Dutch company New Heroes. The overall project consists of both documentaries, a performance and installations - and has as its agenda to investigate participation and local democracy in various European countries.

This version, which specifically focuses on urban development, was produced by Østfold International Theater and was first carried out as part of the city anniversary Moss 2020. At that time, the area around the new railway station was the starting point.It is a key point that responsible developers and authorities in the relevant area will eventually have all ideas handed over as an open input to further process. The more contributions, the greater the diversity of ideas!

The art project In Search of Democracy 3.0 visualizes people's dreams of a better city to live in. Film: Harald Fossen

A country in change

Norway is changing. Not only are municipalities and counties merging, the physical landscape is also changing: motorways are being built, new tunnels are being dug, port areas are being moved. This to both joy and sorrow, depending on who you ask.Østfold International Theater asks you who live in and use the city. What kind of future public space do you want where you stay on a daily basis? Afterwards, we will draw your answer.

Below: The ideas for the Moss of the future range from water slides for horses to the observatory and museum. You can see some examples here:

Østfold Internasjonale Teater (ØIT) is a regional theatre based in Fredrikstad led by Artistic Director Thomas Østgaard.