Acupuncture #1: "Processes of Becoming - Graz Reininghaus and its future development between utopia, imagination and reality." 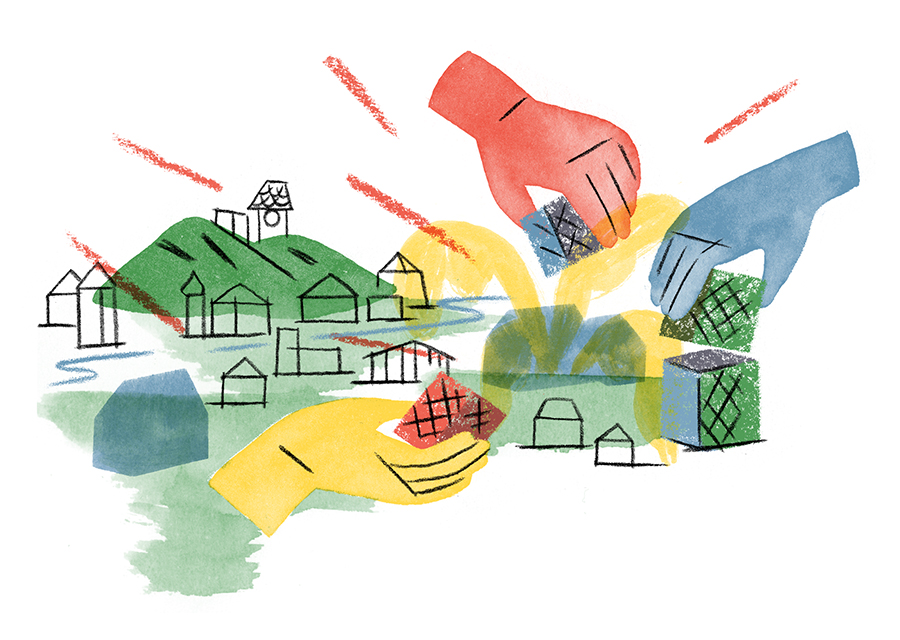 Danae Theodoridou – a performance maker and researcher who focuses her work on the notion of ‘social imaginaries’ and the way art can contribute to the emergence of social and political alternatives – has been invited by La Strada Festival to develop her "Artistic Acupuncture" in the area of Reininghaus in Graz, Austria.

Transposing utopias into a solid reality is a creative practice that has often revealed a strong relationship to city development, urban planning, future mobilities and human interactions.

The history of cinema, by way of illustration, is full of examples of futuristic urban landscapes – from the visionary Metropolis of Fritz Lang (1927) to the more recent version of Blade Runner 2049 (2017) – that transport us into a speculative exercise of imagining our tomorrow. On the one hand, this genre of science fiction production provides a huge reserve of precious imagination but, on the other hand, it has mostly offered us dystopian models of future cities, where giant buildings and skyscrapers oppress the lives of citizens and where the overall social context becomes inhuman and unsustainable. In most of these fictional representations of the future of humanity, living conditions and the social environment seem to be dominated by feelings such as fear, chaos, anxiety, inevitably leading to a continuous struggle for basic existence.

A dystopian future seems to be more attractive to film audiences – eager to “experience” fictional disasters – but the daily reality in the construction of (livable) cities and urban landscapes definitely requires a different view and approach.

With the aim of exploring diverse horizons of possibilities, the evolving understanding of public space, its essence, use, functionality, impact and role, is being addressed by an increasing number of contemporary artists and creative practitioners. Through their actions, projects, ideas and questions, these artists are playing a fundamental role in that field, interrogating the deep and direct realities of places and communities and thereby providing multiple meanings, insights and interpretations related to the concept of public space.

Can we imagine a different social environment in the future urban landscapes? How can we envision and design the evolution and development of our neighbourhoods? What will future human interactions be like? What is the role of art and culture in the processes of urban renewal and urban planning?

These are just some of the initial questions that underlie the multifaceted and visionary project developed by the artist Danae Theodoridou in Reininghaus in Graz.

Let’s start with the context.

Within this complex and long-term context of urban renewal, in between private interests, public responsibilities and citizens concerns, Danae Theodoridou positioned her role as a distant observer and visionary contributor, engaging in a series of conversations and speculative exercises together with a group of different local actors.

It is really important to highlight the great effort made by the artist to meet a vast and diverse number of people in Graz. Politicians, architects, sociologists, investors, members of Reiningherz (a group of experts from different fields who are interested in the development of the area), artists, cultural professionals and different citizens who have links to the area or to community work, have met with the artist and have shared with her their thoughts and visions on the development of Reininghaus.

The conversations between several actors to imagine the future of this particular area actually started a long time ago, and La Strada, which has been involved in cultural policy discussions around the area of Reininghaus for many years, has organized there several projects and and performances since 2006. Nevertheless, even if the groundwork for a horizontal dialogue and the debate about the role that art could play in the ‘process of becoming’ of Reininghaus were already there, the presence and the different encounters and actions developed and proposed by Danae Theodoridou have significantly sped up the whole process. This has given and expanded a new awareness about the potential of the area and the positive consequences of exchanging views, sharing imaginations andengaging in speculative exercises.

Among the different observations collected during the interviews, we could share those by Raimund Berger & Maria Dunkl-Voglar, members of Graz’s oldest civic participation group ‘Mehr Zeit für Graz’, saying that: “Transparency in politics and smaller groups of citizens that can practise direct democracy are necessary elements for building a community”; the view of the Reiningherz group, mentioning that: “Social diversity is a necessary criterion when designing an area”; the opinion of the architect Andreas Lechner: “We must keep some safe areas for experimentation in cities and not give everything to ‘experts’"; or that of Edith Draxi, artistic director of unit – a cultural society of Karl-Franzens University of Graz – affirming that: “A city needs to secure frames for ongoing discussions, artistic education and strong cultural policies”.

Several other questions emerged throughout the encounters. The artist started with the valuable practice of listening in order to collect a flow of needs, desires, concerns, suggestions and frustrations. With the aim ofcultivating processes of ‘commoning’, Danae Theodoridou has captured – through the voices of the numerous actors and citizens she listened to – the different elements that characterize the delicate growth of a city: the importance of having a step-by-step development driven by citizens, instead of a top-down plan by investors; the request for citizens to be regularly informed and given agency in order to make decisions regarding how their city develops; the importance of organizing specific initiatives that bring people together as many feel that their communities are in constant risk, threatened by neoliberal policies that aim to destroy everything communal. These were some of the thoughts shared during the conversations.

More direct questions complemented the above reflections: how to plan what stands ‘in between’ the hardware of a city (its buildings and permanent infrastructure)? What phases stand between the zero degree of an empty urban territory and a newly built area in this territory? How do these middle phases define an area? How to practise community? How to build locality? Where does social exchange take place in an area? What spaces are provided for it? How can the area of Reininghaus be recreated based on the original principles of its first owners who created a holistic, social enterprise that included also recreation spaces for its employees etc.?

Inspired by all these reflections about the construction of public space and its implications for the social environment, and motivated by the potential that art and culture can play within this sphere, the artist came up with a multi-layered proposal composed in the form of a question: WHAT IF?

WHAT IF? includes a main larger proposal combined with four other smaller projects – or chapters – which are all closely interconnected.

The main layer of the proposal is focused on the key challenge that art and culture can play in the area of Reininghaus: the activation of Tennenmälzerei, the most representative building of the old brewery, as a cultural centre for the neighbourhood. The artist proposes a temporary activation of the centre for a period of three months in order to experiment – through a diverse series of activities – the potential that the centre might have for the social and cultural life of the area. According to her words:

“the temporary activation of Tennenmälzerei will pay particular attention to social diversity and cultural exchange offering a sharp example of how the centre would look and what it would offer to the newly built area”. 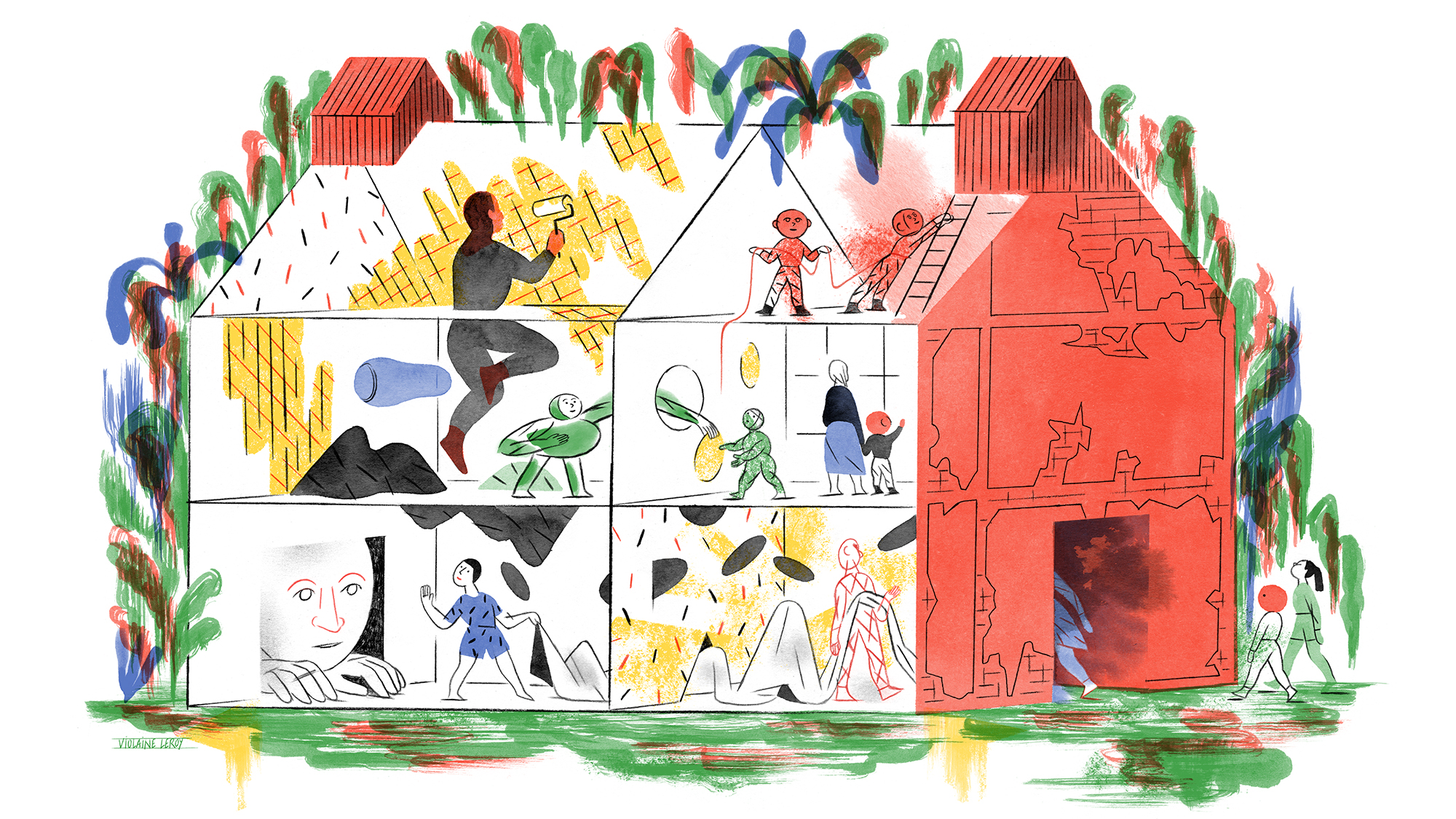 The other chapters of the proposal – which include performances, assemblies, lectures, group discussions, tours, workshops, installations, etc. – will deal with many of the insights that emerged during the encounters and conversations that the artist realized in Reininghaus. The articulation of community life in public space; the conditions and methods to practise co-existence; the cultivation of common good; the practice of co-creation and co-construction; the importance and meaning of the temporary structures (the software) that move among the permanent structures of the city (the hardware); or the weight, impact and effect of the network of relations that takes place in the public sphere, constitute the different ramifications that spread themselves from the core of the artist proposal. It’s worth saying that part of the different activities envisioned by the artist will take place between April and June 2020 in Reininghaus Graz: in the Tennenmälzerei, in the public space and in the temporary Pavilion (Das Dorf, designed by Alexander Krischner).

A framework to invent the future

Within the possible missions of art in public space, Danae Theodoridou is invoking a new vocabulary of practices – shared and co-created – to articulate the role of art and culture in the configuration of public space, not only in its abstract definitions, but mostly in its essential role as shaper of public life.The artist, in collaboration with La Strada Festival, is addressing the numerous challenges presented by the urban renewal of Reininghaus in the very early phase of its ‘process of becoming’, creating therefore a possible real impact in the ongoing definition and design of the area and its social environment.The focus on the ‘commoning’ and the different speculative exercises generated by the artist can trigger new and unexpected intuitions related to the sense and meaning of living together. By bringing the project to a different scale and dimension, we could say that the proposals made by the artist respond also to the concerns and questions posed by Werner Schrempf, director of La Strada, about how we’ll live in this world in the future.The artistic practices in the public space – and the specific case of the research realized by Danae Theodoridou in Reininghaus Graz – open a huge field for experimentation and new frameworks to invent the future.

“Artistic Acupuncture Missions” took place in Europe between spring 2018 and late 2019, hosted by 9 IN SITU partners, as part of the ACT project (2016-2020). The concept of this experimental artistic research project is as follows. concept of this experimental artistic research project is as follows. The partners invite a foreign artist to spend up to six days in their local context to tackle a local issue they have identified beforehand related to one of three themes: social justice, cultural identity and urban renewal. During her/his stay, the artist receives insights from local politicians, activists, social workers, inhabitants…With a traveller’s eye, a fresh and perhaps slightly irreverent way of looking, she/he will come up with a proposal for a future artistic intervention. This proposal may or may not be realised. It will be valued as a unique artistic perspective of a specific European context, illustrative of the artist’s particular way of reading social spaces.