Acupuncture #5: "In the New Desert: the local and global challenges of rural depopulation" 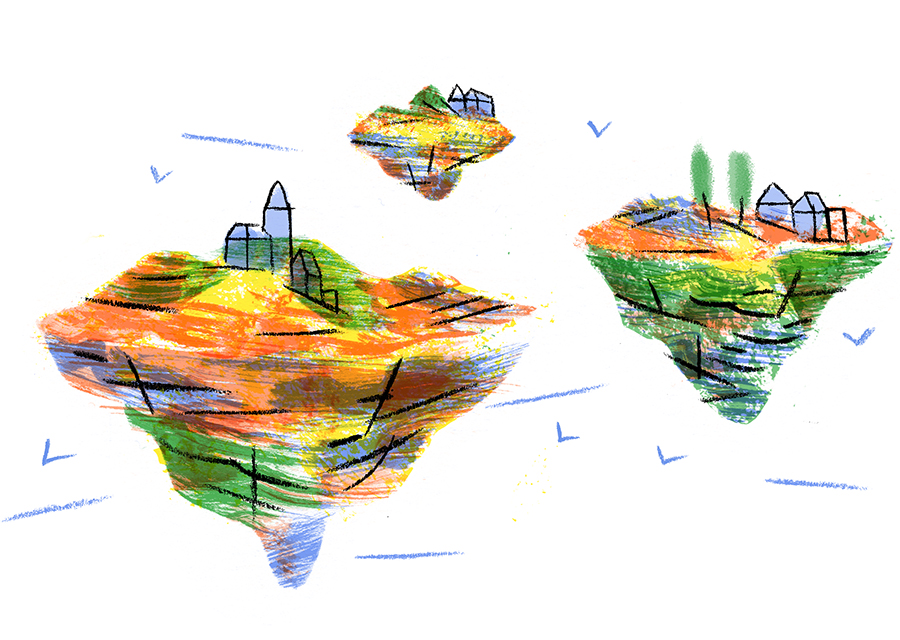 In 2019, dance artist and choreographer Deirdre Griffin was invited by IN SITU to address the complex issue of rural exodus in Catalonia through the development of a creative response. Her "Artistic Acupuncture" took place in Tàrrega (Spain), in close collaboration with Fira Tàrrega.

In 2016, the Spanish writer and journalist Sergio del Molino published a book that finally gave a name, a definition, to a profound phenomenon that has long been affecting a large part of the Spanish territory. Empty Spain, the title of the book, gave a new and potent visibility to rural Spain, to a wide constellation of small villages and rural areas that, since the accelerated process of industrialisation in the 1950s, has been suffering a relentless exodus of people towards the cities.

The divide between the urban and the rural seems to be increasing rapidly, and the thin line that keeps them connected is currently facing the risk of being broken forever. According to the author of the book: “There are two Spains: an urban and European Spain, and an inland and almost deserted Spain. Communication between the two parts is, and has always been, difficult. Very often they seem to be foreign to each other. However, the urban Spain couldn't be understood without the empty Spain”.

This so-called empty Spain is present in popular songs, literature and movies – from the famous Don Quixote by Miguel de Cervantes to the movie Volver by film director Pedro Almodóvar, just to give a few well-known examples. But the reality is that, beyond this somewhat romantic flow of references and memories, the rural world has suffered and continues to suffer a harsh abandonment. The people still living in the villages share a growing feeling that their existence is being denied, neglected, forgotten.

From that shared feeling emerged also a political claim that spread around various peripheral areas of Spain. With the participation of different platforms and organisations, among them the political initiative of Teruel exists, many people started demonstrating and declaring that, instead of an “Empty Spain” there is an “Emptied Spain”, a country that is emptying itself due to the wrong political decisions and directions taken in recent years.

Beyond some slight differences between definitions, the phenomenon of rural depopulation is today a visible and recognised problematic, which is being addressed by several spheres of the society, including through cultural and artistic perspectives.

Tàrrega and its seven small villages: encounters in the periphery

It is in that complex scenario – which is having global and local impacts – that Deirdre Griffin started her research. During the short residency she visited Tàrrega and the seven villages in the surrounding area, explored local councils, libraries, cultural centres, agricultural cooperatives and schools. Above all, she met and talked with different people that, through their daily life and activities, are deeply involved in this struggle.

Every individual village that the artist visited has its own specificities but all of them are experiencing a sense of isolation due to this process of exodus and a diminishing presence of services.

The artist met several people involved in the performing arts scene, such as Laura and Genís, who work mostly with music and theatre, Xavi and Anita, who run a circus company called Rauxa in Tàrrega, and Miriam and Miki, who live in La Figuerosa, a village of 39 inhabitants. The artistic work that they all try to bring to the area made Deirdre think about the importance of art in the community, and to question how they can get support in order to develop their art practices in the local context.

Other meetings took place, such as with Sebastià Mata Molinero, education, youth, housing and repopulation councillor in the County Council, living in Maldà, a village of 225 inhabitants. A meeting with Marta Capdevila Guasch, the librarian of the Belianes Library and a visit to the primary school in Maldà showed the artist the efforts that people living in the area are making to move things forward and counteract the process of abandonment.

Within this framework, the encounter with Carles de Ahumada, an industrial engineer, winemaker and president of L'Olivera, an agri-food cooperative combining the production of wines and oils with the employment of people with disabilities, was particularly meaningful. The values of sustainability and responsibility, the organic slow production, concepts of fairness, proximity and local economy, the attention to social inclusion are all elements that characterise the ethics of this cooperative and made the artist reflect on the important values that emerge and grow within this context – call it rural, low-density areas, non-urban, etc. – and that are, on the contrary, somehow vanishing in the increasingly anonymous and self-absorbed cities.

Land conservation and the impact that factories, farming or tourism can have on it were also issues that were raised during the conversation with Ignasi Aldomà Buixadé, geographer and author of works such as The crisis of rural Catalonia (1999) and Atlas of the new rurality (2009).

Throughout all these encounters the artist went deeply into the nature of the rural depopulation concerns, with all their layers of problems, needs and future imaginations. From each encounter, Deirdre Griffin created a keyword summarising the main topic, ideas and essence of the conversation. These encounters paved the way to specific critical questions that nourished her research and creative proposal.

Can cities sustain the huge influx of people to them? What happens to the villages and towns, which become deserted of amenities and eventually population? How can we persuade people to stay in these villages and encourage repopulation and a sustainable life in these areas of mass emigration? Are rural territories a new opportunity to make more inclusive societies? How can art and culture counteract this depopulation phenomenon?

Take action for a sustainable future`

The profound experience the artist had in Tàrrega and in its surrounding villages released several thoughts and considerations. An initial and fundamental reflection was that: “At the beginning one feels not directly affected by depopulation, but one finally realises that it is linked to everything because it is changing the world”. The way we treat the land, the way we consume, the huge pollution caused by large corporations focused on fast farming and factory production, the profit motive, the lack of solid environmental policies are some of the aspects that need to change, also in order to reverse the depopulation and abandonment of rural areas.

As regards the notion of profit, Deirdre Griffin stated that: “This is the major question of my project: the word profit and how can we look at this word and rethink its meaning. Can we profit from loss of capital if we are gaining in health, social or artistic benefits?”.

Other important elements she took into consideration in order to prepare her creative response were related to the transport service and the importance of creating better and diversified connections between the villages and the main town. Also she looked at the essential components of human and social interaction, thinking about how to make the rural areas more attractive. The artist highlighted that: “Work and basic amenities are not enough to seduce people to want to stay and set up there. Humans need social interaction and fulfilling stimulation. A settlement needs to have a good social interaction and also to feel part of the local community […] Are we capable of making these low-density places attractive? Are they offering a way of life for contemporary society?”. 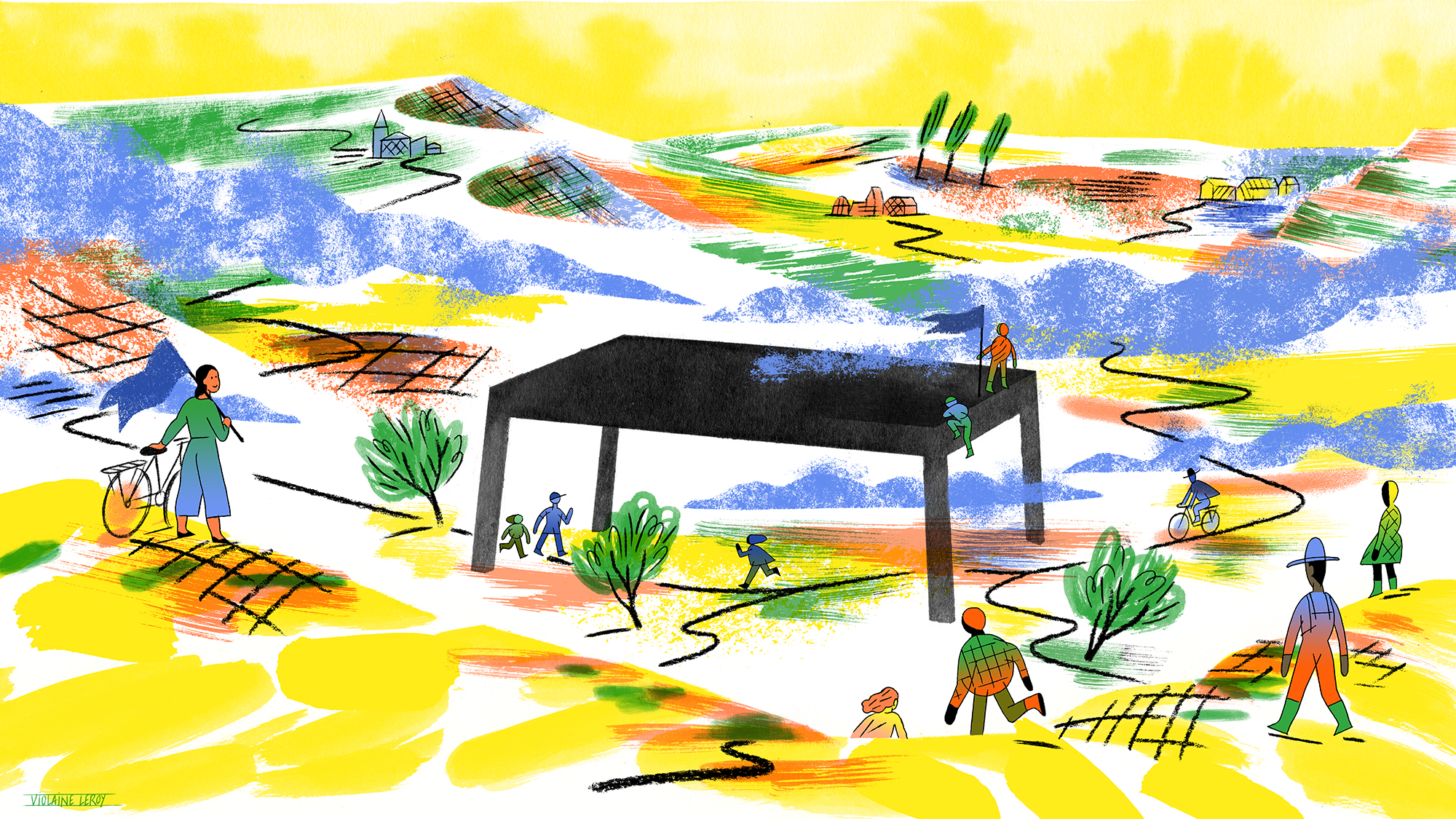 Out of these reflections, the artist came up with three symbolic and practical creative proposals.

The first idea is creating a rural blue flag that – like the existing blue flag for beaches – would represent high environmental standards for local farmers and industries. The flag would be an element of pride and a sign of quality, meaning that the company is taking care of people and land: “Companies would be proud to fly this flag at their establishment because they are executing high levels of growth and positively affecting the local community and environment. Consumers would be educated and feel the benefits from clean local foods”.

The third and more performative idea is related to the creation of a table: a movable object that can provoke new encounters and engage with new audiences. As explained by the artist: “The Table would be a solid and sound interdisciplinary sculpture that initiates various activities and events to it, open all year round. The Table represents the body that holds food, games, dances, songs and anything else socially responsible. The Table is strong enough to be danced on and light enough to be carried”. The travelling table would move through different villages, responding to the proposal of local artists. The audience could choreograph and interact with it. The Table would become a living scenario, a living theatre setting, where the artist imagines an initial series of three performances and a following celebration with the local community. The Table would stay for a year in a village and would then be transported to the next performance stage.

The massive human movement from the rural to the urban areas is urging us to take on a new environmental awareness. As stated in a 2019 UCLG policy paper: “The current environmental crisis, together with urban sprawl, makes it necessary to invest greater efforts in protecting biodiversity, natural habitats and fostering inclusive rural-urban linkages. The latter is a key factor to ensure sustainable food systems and food sovereignty. Disparities of income distribution, livelihood opportunities, healthcare services, quality education, cultural facilities and quality of life in general are some of the main problems affecting rural areas today vis-à-vis cities” [1]. As shown by the Acupuncture mission developed by Deirdre Griffin, art can definitely open new perspectives and new meanings about the rural area and its direct linkages to many crucial aspects of life.