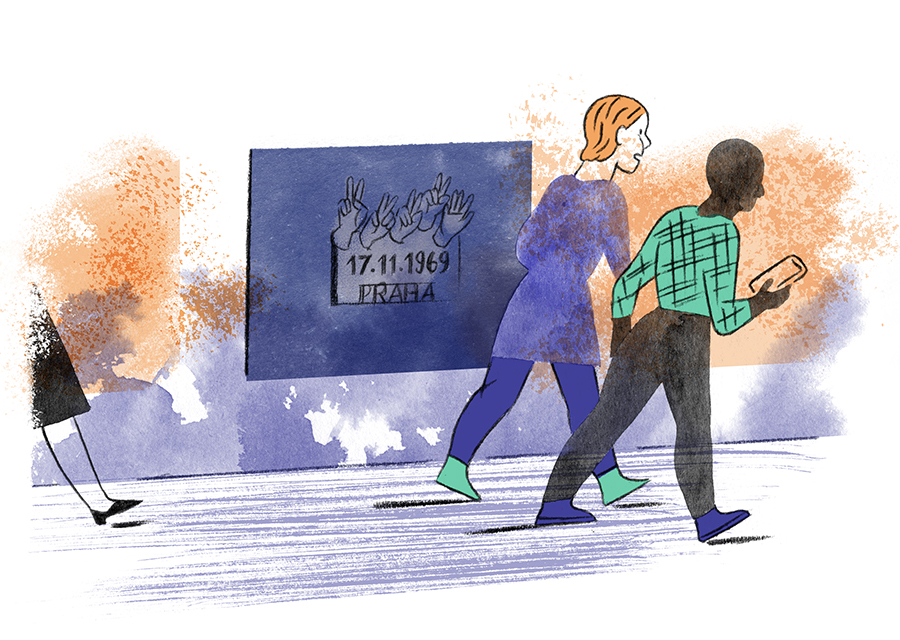 In 2019, the artist duo zweintopf formed by Eva and Gerhard Pichler were invited to do an Artistic Acupuncture in Prague (CZ). For this mission the artists decided to work on the specific subject of the monument, the sculptures, and their meanings - in collaboration with 4+4 Days in Motion.

Defining the multi-layered nature and function of the diverse monuments that have appeared over the long course of history would be an exciting, but nevertheless complex, task. If we were to try to write a history of the monument, we could easily get lost in a flow of multiple questions, as we might divert from the linearity of history and immerse ourselves in the traces of multiple cultures.

If we go back far into the past, we would certainly notice that the very first ‘monuments’ were devoted to religious and funerary purposes. This essence of remembrance and tribute is definitely a persistent element in the history of the monument, but what has mostly emerged throughout the centuries is its function as a vehicle for political expression and representation.

In view of these distinctive elements, what should a monument represent in our current time, and how might it do that? How could its intrinsic, and often controversial, link to the public sphere evolve?

Monuments are a physical illustration of history, which is disseminated and made visible throughout public space. Monuments become solid statements that tell stories and represent the memory of a population, but herein lies a significant controversy: memory is often a subjective and abstract concept, shared by some groups of people and not by others, something that may change according to the political control exercised over it. History shows us plenty of monuments that have been removed, looted, demolished or even relocated after removal, following the unpredictable flow of history. War trophies have been exhibited in several European capitals; obelisks have been looted and only occasionally repatriated (e.g. the Obelisk of Axum, looted and transported to Rome in 1937, and repatriated to Ethiopia in 2005); statues of obscure people involved in war and colonial crimes (e.g. Leopold II of Belgium); and endless numbers of other examples that illustrate the scale of this complex issue.

In this framework, public space has always been identified as the main stage for the performance of political power, and monuments and sculptures are some of its most astonishing instruments.

The ‘noise’ that silent monuments spread in public space is part of their struggling existence: trapped between being both cultural heritage and political statements.

This tension is a possible starting point to talk about the Acupuncture mission developed in Prague by the artist duo zweintopf (Austria), who visited the Czech capital in autumn 2019.

This direction brought Eva and Gerhard to visit several sculptures and monuments spread around the city of Prague. Learning about the cultural identity of the city through the historical meanings and messages conveyed by these ‘solid components’ distributed in the public space, was the initial purpose that moved the research of the artists.

This first set of questions accompanied the artists in their initial process of exploration.

With their specific interest in the changing meanings and functions of political monuments in the contemporary era, zweintopf explored the streets of Prague in search of their stone testimonials. The exchanges with Markéta Černá, producer at 4+4 Days in Motion (the local IN SITU partner), and the meeting with the artist Pavla Sceranková, gave Eva and Gerhard several hints about the historic and contemporary cartography of Prague.

Monuments referring to significant events in Czech history (e.g. Memorial to the Victims of Communism, Jan Hus Monument, or the Metronom), and some classical equestrian statues with heroes from the past (Wenceslas Monument, National Monument at Vitkov, King Wenceslas Riding on a Dead Horse), shared the city with an important number of – apparently apolitical­ – public sculptures erected between 1968 and 1989, during the so-called era of ‘Normalisation’.

Beyond the famous monuments marking historic events and the last wave of public sculptures [1], Eva and Gerhard Pichler asked themselves if there was still something missing; if those monuments were still visible; and what do monuments mean to people today.

In this process, the artists explain that: “we realized that there was already a discussion going on within Czech society about if there should be a special monument for the Velvet Revolution. So within all these monuments people have the feeling that something important is missing. That is why we came up with the idea of dedicating our work to this question – or asking this question by pointing to other existing monuments.”

Thinking about a new monument for the Velvet Revolution therefore became the project proposed by zweintopf, which implied a reflection on the intrinsic significance of a monument nowadays, on its symbolic power, on its potential obsolescence, and on its inherent process of (formal and conceptual) transformation in a post-modern and liquid society.

These notions – in addition to the reflection about the temporary condition and participatory implications of contemporary sculptures – informed zweintopf’s idea to approach the public sculptures of the ‘Normalisation’ era “with contemporary strategies of small interventions – and in this way connect them with issues that relate to the past and the present – so that they could make sense also for our time”.

The strategy proposed by the artists is focused on finding new aspects of what a monument could be, by asking the people. They would start a campaign with several posters in public space, asking questions like: Do we need a monument to remember the Velvet Revolution? Formulating this and other questions would be combined with small interventions in the sculptures of the ‘Normalisation’ era as ideal conveyers of these messages. Another step would be creating the hashtag #velvetmonument to invite people from the streets to bring in their thoughts and views.

On the one hand, zweintopf’s artistic proposal – NÁZEV NEZNAMY / TITLE UNKNOWN. Process towards a contemporary monument – points to a specific historic event and to its missing ‘stone narrative’ in public space; but on the other hand it questions the whole practice of monuments and sculptures itself, asking what makes a monument and what, in opposition, an anti-monument.

The formulation of several questions became therefore part of the proposal made by the artists. Does a contemporary monument need to be set in stone? Could a monument also be a process? Is a monument able to grow and develop together with us? How could a timeless monument keep pace with the times? Is a monument always tied to one (elevated) place? Does it always have to be the artist who creates the monument?

The different ideas that emerged throughout the Acupuncture mission in Prague reveal a very interesting reflection about the future of monuments and their meanings. The typical solid and static structures of most monuments – and their long-term permanency – collide with the fluid nature and liquid state of current society, as has been deeply analysed in the well-known theories proposed by Zygmunt Bauman. [2]

Moreover, if on the one side many monuments represent the concrete history of a city – as well as a statement of power and a determination for control – on the other side it is also true that many of them have become invisible and no longer speak to people today.

As stated by the writer Robert Musil: “There is nothing in this world as invisible as a monument. They are no doubt erected to be seen – indeed to attract attention. But in the same time they are impregnated with something that repels attention.” [3]

This clash between visibility and invisibility, temporality and permanence, solid and liquid conditions, will certainly feed the conversation about how we will build, understand and conceive the monuments of the future and their presence in the public space.

[1] A large number of public sculptures created during Czechoslovakia's "Normalisation" years (1968-1999) is collected and examined in the book Aliens and Herons, edited by the artist Pavel Karous.

[2] In his renowned essay Liquid Modernity (2000), the sociologist Zygmunt Bauman analysed the liquefaction of the social identity in the 20th and 21st century, where the ‘solid’ (values, beliefs, structures, systems, etc.) was rapidly being melted into ‘liquid’.