Acupuncture #8: "Participatory rituals: when the local encounters the global" 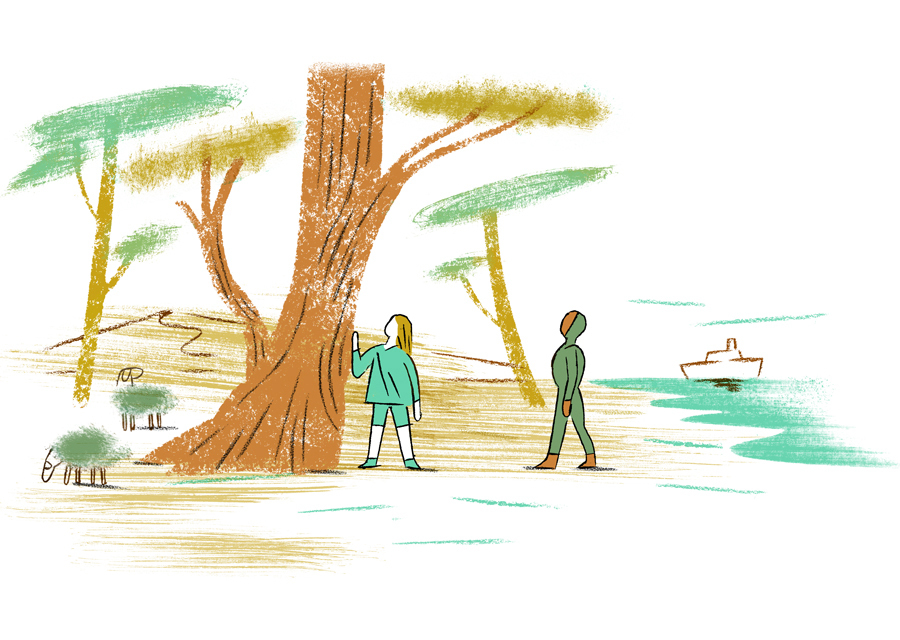 In 2019, the choreographer Joanne Leighton was invited by IN SITU to do an Artistic Acupuncture in Terschelling (NL). In this specific island context, the artist focused her creative response on the notions of the global and the local - in close collaboration with Oerol Festival.

On the tiny island of Terschelling, in the Frisian coastal region in the north of the Netherlands, a small local community of nearly 5,000 inhabitants live peacefully between solitary winters and lively summers.

The daily passages, tasks and rituals of life repeat themselves and people in the community interweave their stories and experiences through a deep connection with their territory and environment.

Nevertheless, in this quiet and rhythmic flow of time there is a particular event that constitutes a sudden change and a profound alteration in the regular ecosystem of the island: the Oerol Festival.

Every year, right in the middle of June, when the warm weather starts to draw visitors to its beaches, a group of around 50,000 people land in Terschelling to participate in the 10-day festival. The whole island becomes a live stage and different corners of its landscape are used for performances, dance, public theatre, music and visual arts projects.

This temporary coexistence between the cultural identity of the permanent inhabitants of the island and the huge number of diverse people coming from outside for the festival, represents a very interesting element of reflection that paved the way for the Acupuncture mission in Terschelling.

Kees Lesuis, Artistic Director of Oerol Festival, emphasized the significance of working on the topic of cultural identity in the island, stating that: “The festival is rooted in this island culture and, with its 38 years of existence, it has become an island tradition as well. But at the same moment it brings in a big number of people from outside and an extended program of contemporary art forms from emerging artists. In a way we can look at the festival in terms of a sociological laboratory. We see the festival as a temporary society in which there is an interesting meeting of the local community with audiences and artists from elsewhere, who meet around the arts and the landscape”.

With these clear components in mind, the IN SITU partner from Terschelling invited the artist Joanne Leighton in order to bring her practice in that particular context and develop her Acupuncture mission in the island.

The research period of the artist in Terschelling was developed through two different phases, with the specific purpose of discovering the two facets of the island. Firstly, the artist visited the context during the dynamic development of the Oerol Festival, which imprints an impressive transformation on the island’s regular ecosystem. Secondly, once she had experienced the energy of the festival, the artist came back to develop her Acupuncture mission in the midst of winter, in January 2019, when the whole environment and local community are immersed in their most intimate spirit and nature.

The context explored by Joanne Leighton is the one of an incredible and beautiful diverse natural landscape. Wide sandy beaches, natural dunes, forests of pine trees, protected rural areas that are home to sheep farming characterise this island scenario, a place also surrounded by shipwrecks.

The search for memories, stories, traditions and contemporary rituals guided the creative process of the artist, who identified in the Terschelling islander women, the focal point of her project.

As stated by the artist: “the story of Terschelling is one of the sea, boats, fishing and men leaving home for months on end. But there is another Terschelling, one that’s inscribed in other stories. It’s the Terschelling of the women who stay at home, supporting the fishing industry, farming, bringing up children, working together to manage the household, the land and the local eco-systems, and playing a major part in the running of the community”.

This particular layer of the Terschelling cultural identity – the unfailing presence of women throughout the centuries and their rich and often unknown stories – became therefore the core of Joanne Leighton’s project. The artist noticed that women were playing a really important role in the civic structure of the island, and she felt since the beginning of her research that there was something around the women on the island she wanted to work on. Women who have lived there forever, others who have arrived on the island from elsewhere, all of them deploying stories that like strong roots were connecting the personal to the collective, the territory, the landscape, the nature, the myth, to the multiple histories of the island and their inhabitants. Women are somehow here representing the stable columns around which the stories of the island circulate and interweave. Due to their strong presence, women are also the windows that can be opened to reveal the diverse layers of Terschelling’s cultural identity. With the aim of collecting and archiving, but also with the clear intention of creating an active space for production and inception, the artist started her methodology by setting up a series of conversations with different women on the island.

In collaboration with the Oerol Festival team, Joanne Leighton got in touch with various women representing different sectors of the local community: a politician; an undertaker, involved in organising funerals and burials on the island; a town planner; a local activist; an elder, with knowledge of the local traditions and ritual.

By walking and talking along the diverse paths of the island, and being welcomed into the intimacy of people’s homes, the artist engaged in conversation with this group of women who told their personal stories as well as the shared ones of the island. As evoked by the artist: “each of the women delivered unique, moving, compelling stories. I loved listening to them. We laughed, we exchanged. I felt incredibly privileged to hear them and to be with them”. 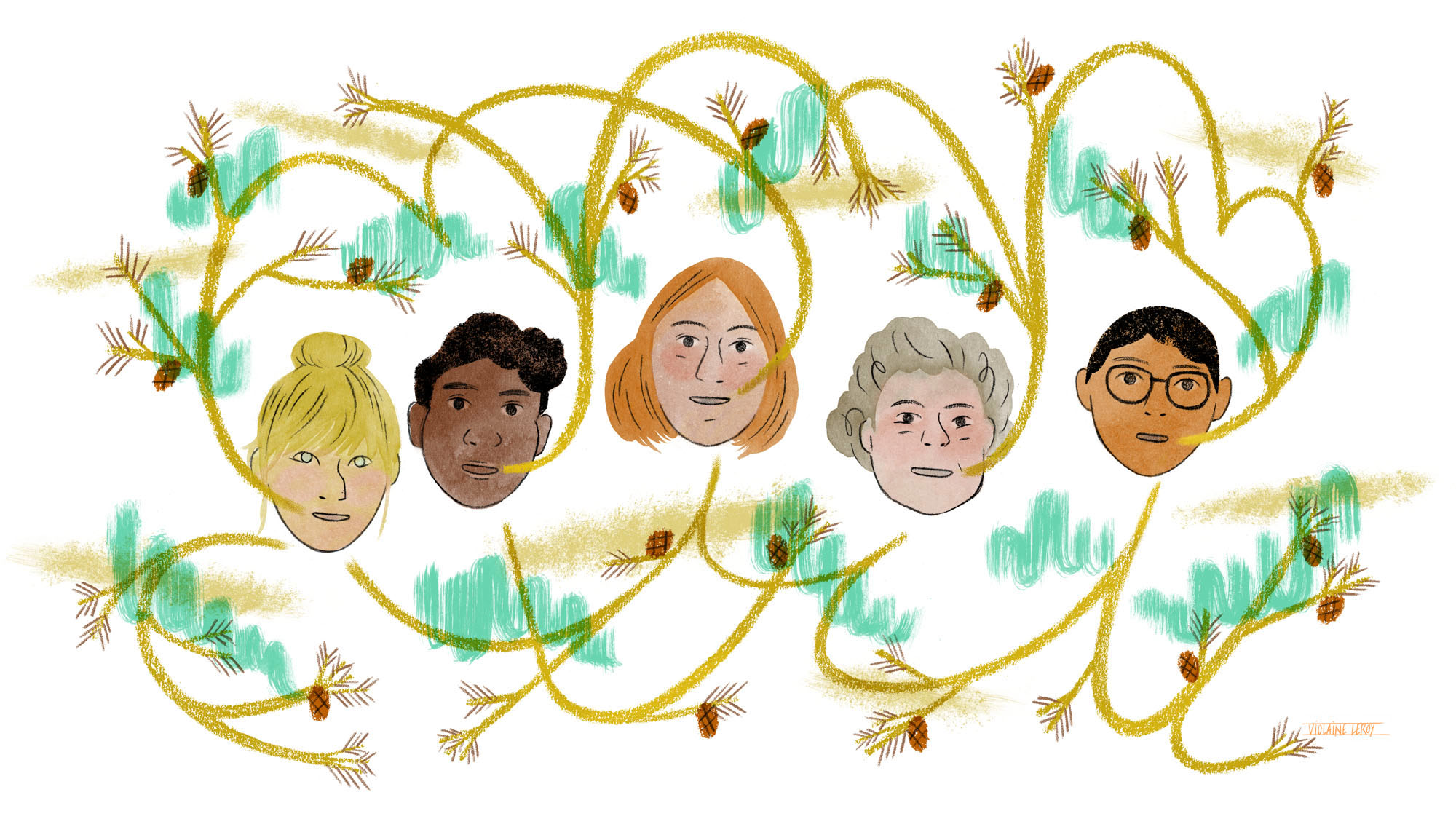 The Proposal: The Terschelling Trees

Enriched by the intensity and diversity of the women’s stories, by their insights, anecdotes and intimate thoughts, and inspired by the natural environment of the island, the artist found the perfect frame for the elaboration of her creative proposal.

The deeper she entered the reality of the context, the clearer the forms, concepts and elements of her artistic process became.

Intrigued by the potential of rituals and interested in notions such as togetherness, collective knowledge or participatory practices, Joanne Leighton proposed an ecological artwork called The Terschelling Trees.

“What are our contemporary rituals, how can we create our own rituals and give them significance?”Driven by this question, the artist came up with the idea of creating a singular and evocative site, formed by 24 trees planted in a circle. According to the artist description: “the trees form a living theatre that is a site for sharing stories, women’s stories, and a place for contemplation, for remembering one’s own stories. People can visit individually, accompanied, or in groups, each person coming for their own reasons at any time. It is a quiet place, one for coming back to, engaging us in a ritual that is played out over time”.

The trees symbolize the women as a stable, constant and rooted presence in the island. The designated area would become a place for convergence and sharing, a living scenario where the 24 trees would be altered during their early growth cycle by cutting and tying, becoming, as they grow, explicit markers for the site.

The Terschelling Trees would function as a permanent space that can allow stories to be told: to act as a generator, a container and disseminator of women’s stories. The site is intended to be a theatrical but natural place, where life, environment and theatre would be merged in a circular movement of influx and outflow. The artwork, aiming at reconnecting people with the natural environment, would have a double dimension: the physical one – a space for rituals, oral traditions and women’s storytelling – and a virtual one, where the stories would be collected and disseminated. The latter foresees tagging each tree with an email address that would “enable visitors to correspond with the trees anonymously, confiding stories or sending messages. The trees become a cypher, a conduit, for all those who visit”.

Throughout the different dimensions of this creative proposal, the artist tackles the cultural identity of Terschelling island, focusing on the essence of the local community, but also creating a space for complicity with the temporary visitors of the festival.

A final concern about her living artwork is related to issues of responsibility and governance. How can we make a work that questions governance? How can we gently create a structure where there is ownership and sharing? The Terschelling Trees, this mystical connection between people, nature and stories, would be at the same time a strong and a fragile project site, requiring attention, wisdom, awareness and collective efforts. In this necessary process of ‘taking care’ the women from Terschelling would govern the site and act as their guardians.

Finally, through its participatory rituals, the artwork would bring people together creating a new utopian community that would cross the boundaries between the local and the global. As narrated by Hakim Bey in his Pirate Utopias, this ‘reframed’ and ‘liberated’ public space could recall those mini-societies that emerged in some islands in the past: “some of these islands supported ‘intentional communities’, whole mini-societies living consciously outside the law and determined to keep it up, even if only for a short but merry life”.