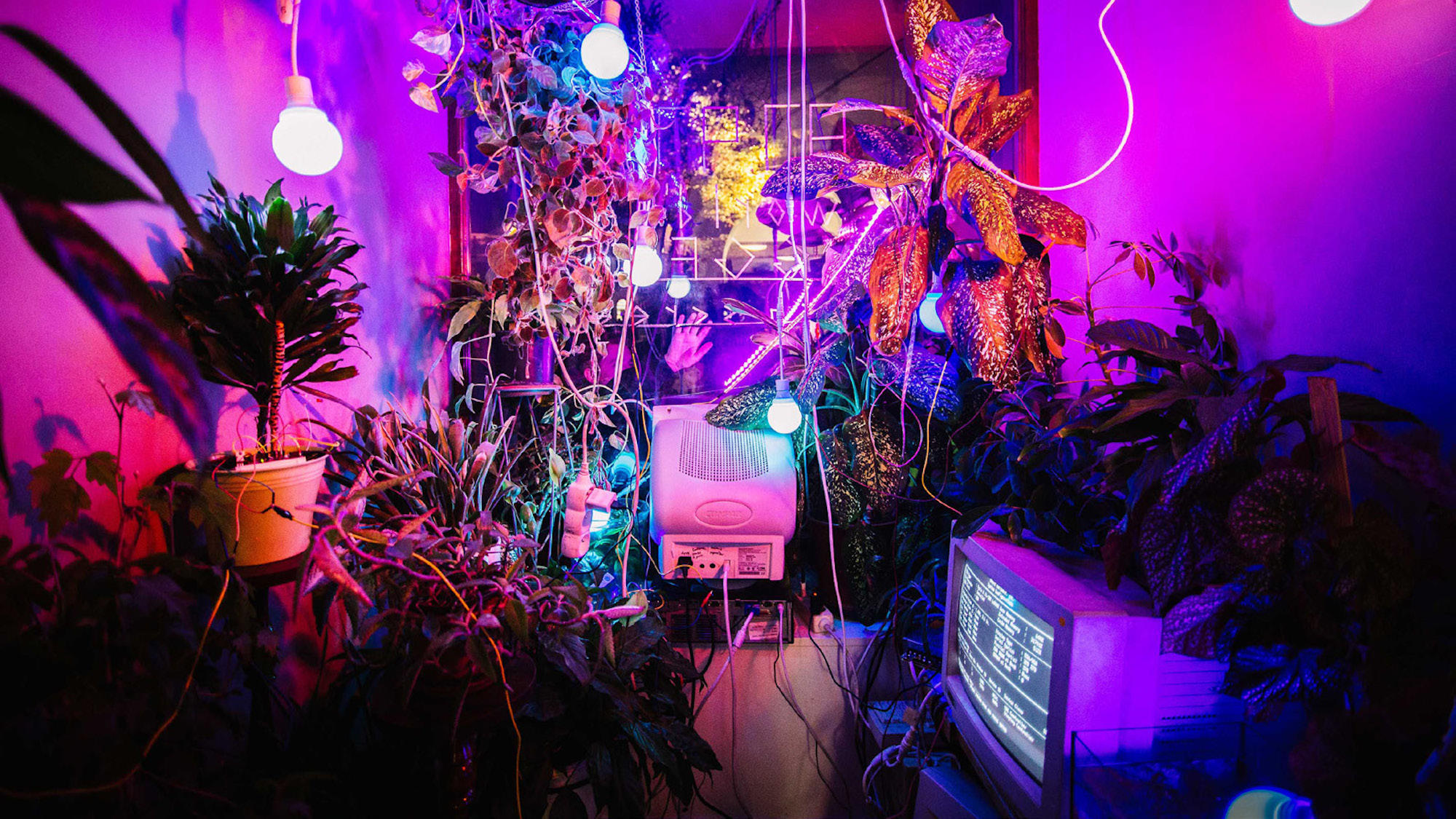 Upon returning to Slovakia in 2009, after finishing her studies in France, Zuzana Pacáková was playing with the idea of establishing a contemporary art festival that had been missing in her hometown of Košice. Inspired by Paris’s Nuit Blanche, she enthusiastically decided to enter a fascinating circle, introducing the now-renowned and popular festival of contemporaryart, Biela noc, to Slovak audiences.

To discover artworks in public spaces, but also to appreciate everyday moments in another manner.

The festival organizers’ initial sense of challenge was quickly replaced by exaltation and interest from the public and the media, which transformed Biela noc into the most well-attended festival of contemporary art in Slovakia, held annually in Košice, and since 2015 in the capital, Bratislava as well. The festival’s goals are numerous: to promote and disseminate art, to stimulate public interest, as well as to highlight unconventional locations, or even to present familiar ones in a new light by providing a night-long magical city walk. Biela noc not only invites two-hundred thousand visitors every year to walk through the streets to discover artworks in public spaces, but also induces spectators to notice and appreciate everyday moments in another manner.

Since Biela noc was launched in 2009, it has become an art festival for the general public, attracting more than two hundred thousands visitors every year. Audiences greatly long to participate, to discover and to be part of the experience. Given this tendency, the organizers are consciously seeking to present inspirational, visually attractive digital artworks with a high degree of interactivity. The festival also offers an opportunity to expose artists’ works to a layman’s or a professional’s critical view. That was the case with FireWorks with Me in 2014. The collaboration between two young Košice-based artists, the graphic designer Zana Petrovičová and the programmer Ondrej Makši, resulted in one of the highlights of the 2014 edition. With the support of a local IT company, they created an interactive projection, a digital game for the viewer, projected on an extensive screen, strategically located in the city’s historical quarter where the annual New Year celebrations associated with real fireworks takes place. FireWorks with Me, however, enabled visitors to enjoy its digitally abstract or geometric version, controlled by smartphones. The seemingly simple principle of entering a short text or a message to the application and then displaying it on screen triggered colourful visual and sound waves, reflecting the authors’ intentions. It did not take long for participants to understand how the mobile-app technology correlated with the artworks. Despite individual uses of mobile devices, the palpable companionship emphasized the strength and importance of the individual within the collective, and visitors could spend hours interacting with one another. 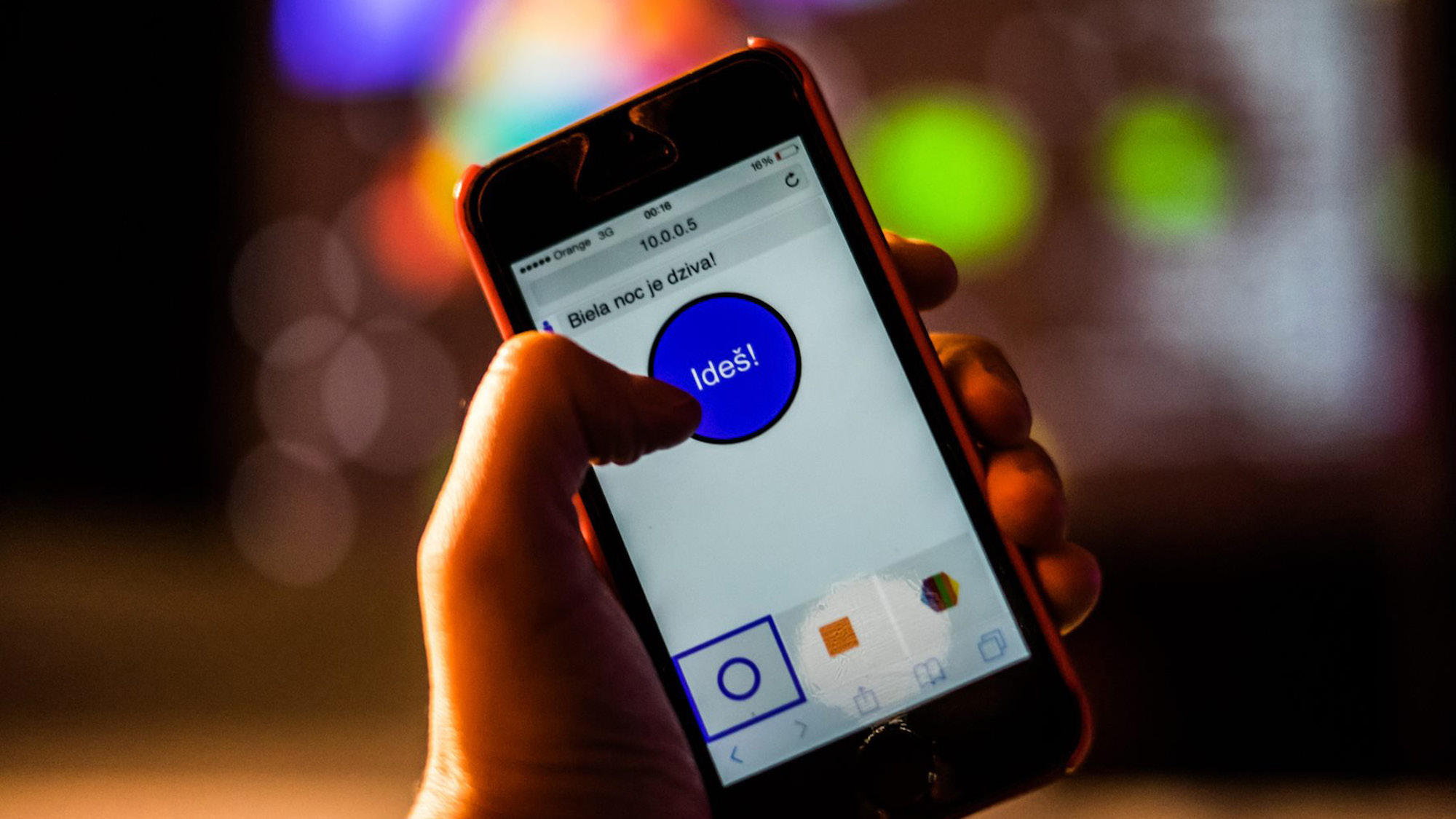 In 2016, a follow-up was devoted to the public interest in the use of technologies and their interconnection and application in art. Monika and Bohus Kubinski’s project Level was a successful example, and also Slovak. A spatial installation comprising several reinforced concrete balls from the Second World War placed in the basement of the East Slovak Gallery formed the artwork’s material skeleton, charged with an artistic and emotive impulse. The matrix was complemented by augmented reality (AR) technology that enabled the public to enhance the perceived artistic experience. AR emphasized the natural sculptural beauty of simple ball objects and at the same time supplemented the historical context that could have vanished by placing originally non-artistic objects in the gallery. The technology present in the tablets available to visitors gave them the opportunity to “lift” parts of the work into the air; visitors could watch them levitate in different shapes, thus providing them with additional possibilities to interpret the authors’ concepts. 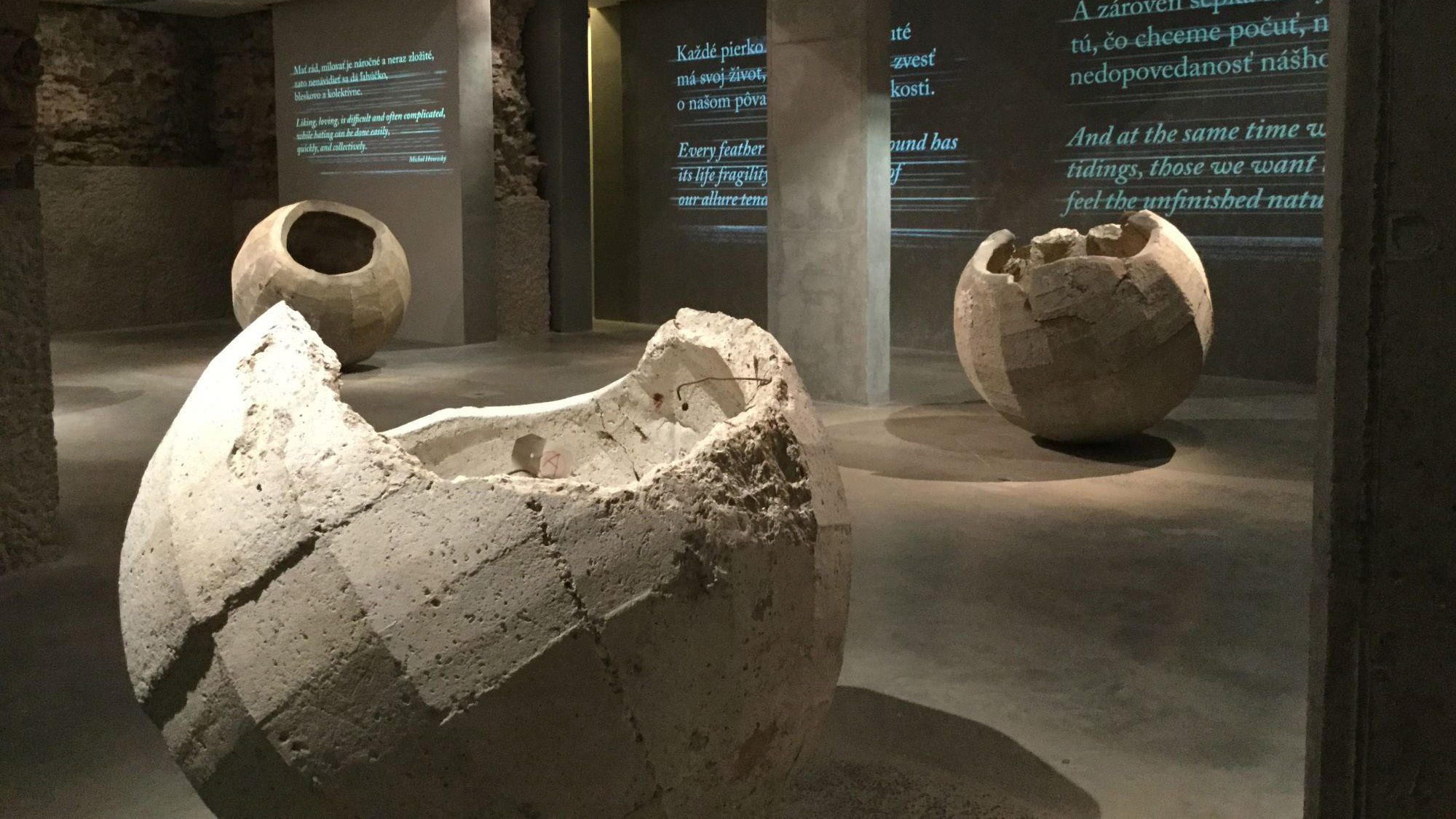 One of the most recent Slovak projects linking art and technology was Perspecktíva by Braňo Bernár, a member of the Košice collective Showmedia, presented at the Biela noc in 2017. A precisely situated artwork in public space, on a bridge in the Zuckermandel residential area near the river Danube, it consisted of regularly arranged geometric shapes — squares complemented with pre-programmed light tubes responding to data entered into a mobile app. The sprawling project could be interactively controlled, and the lights varied according to a spectator’s imagination and desires, which at a given point provoked a shift in perspective, enhanced by the intensity and frequency of colour changes. Despite its playfulness, the project did not lose its artistic value and proved to be the right choice by the organizers to support the emergence of a new, freely variable installation. 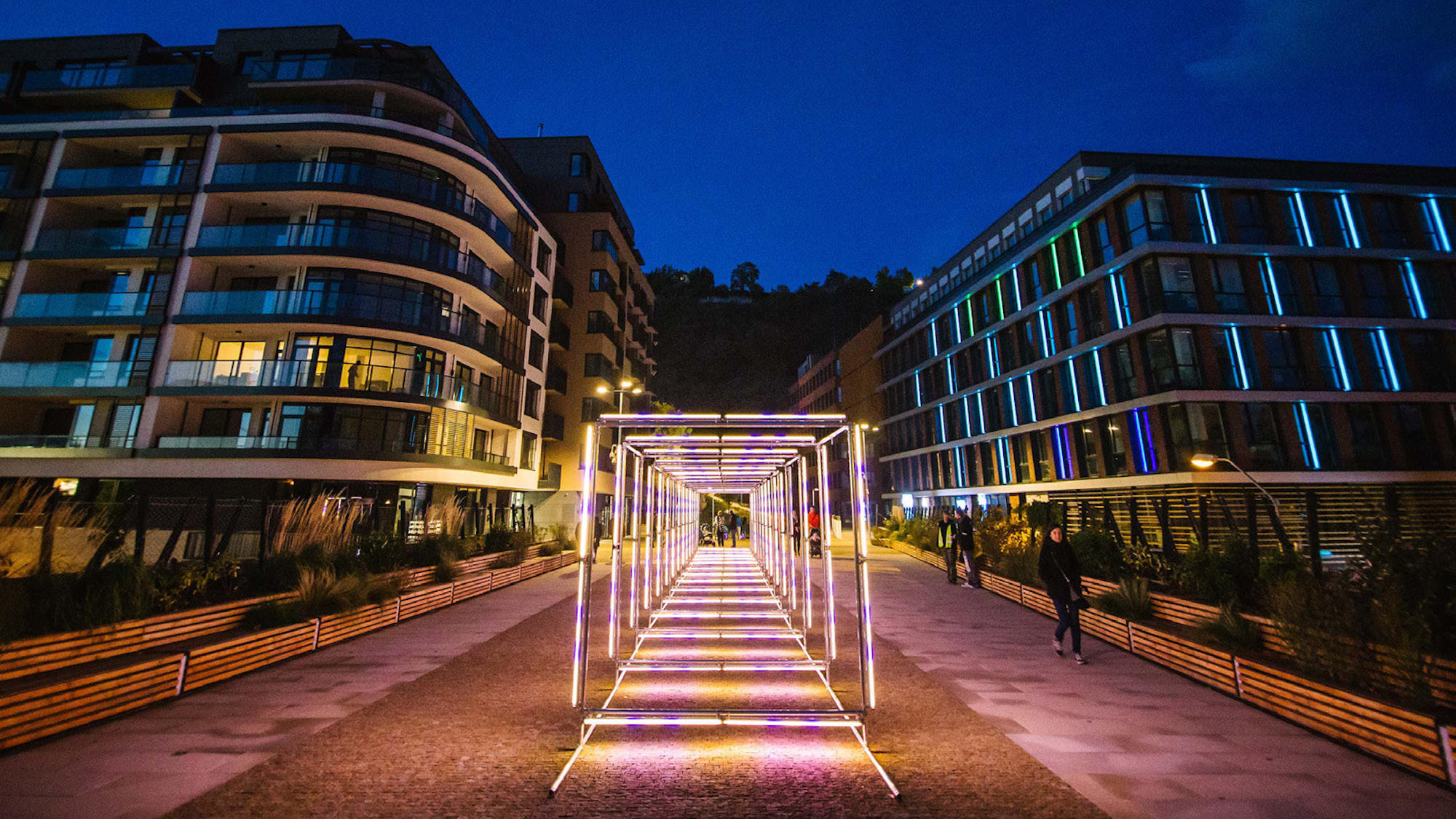 Opportunities for the Young

Every year Biela noc offers the possibility of presenting innovative projects by established as well as by emerging artists, who often come with more progressive, imaginative, healthy and “positively aggressive” approaches — despite not being technically fully elaborated. This was equally the case with the 2017 presentation of the BIOS project, by the young conceptual artist Michal Mitro, created in curatorial cooperation with the VUNU collective. A site-specific interactive installation, juggling on the verge of bio-hacking, new media art and DIY philosophy, connecting computational technologies and room plants by a unifying element — the physicality of man in the most natural form of interactivity/ interaction, in the form of intention and touch. The project’s concept rests on the realization of the basic similarities between plants and computer technologies, which on first view appear incompatible and incomparable: “The world of plants is a primitive system with inputs and outputs, where light and water constitute inputs and physical growth is an output. The world of computers is a meta-system of inputs and outputs, where inputs are zeros and ones and outputs are zeros and ones, usually configured in a somewhat more sophisticated fashion. BIOS stands for basic input-output system. Plants could be considered as BIOS. BIOS is also a software that boots a computer. Therefore, plants can boot a computer...? Warped logic leads either to an error or to art.” Mitro’s BIOS represented a conceptually and physically complex work, pointing to the continuity and interconnection between mankind, flora, and technologies. The artwork’s interactive aspect was present due to the use of conductive tape over a shop window. The installation placed behind-the-window thus reacted directly to human touch, by light and sound.

Warped logic leads either to an error or to art.

While we could consider Biela noc as a relatively young festival, it is following world trends in digital art, seeking to invite well-known names dedicated to interconnecting art and digital technologies, while at the same time emphasizing the need to support creations by Slovak artists in this field that is increasingly being embraced by the general public. Biela noc is a unique event in Slovakia and it has been one of the factors thanks to which Košice has recently succeeded in being designated as the Unesco Creative City of Media Arts.

This article was originally published in Klaxon #8 - The Augmented City co-edited by CIFAS.