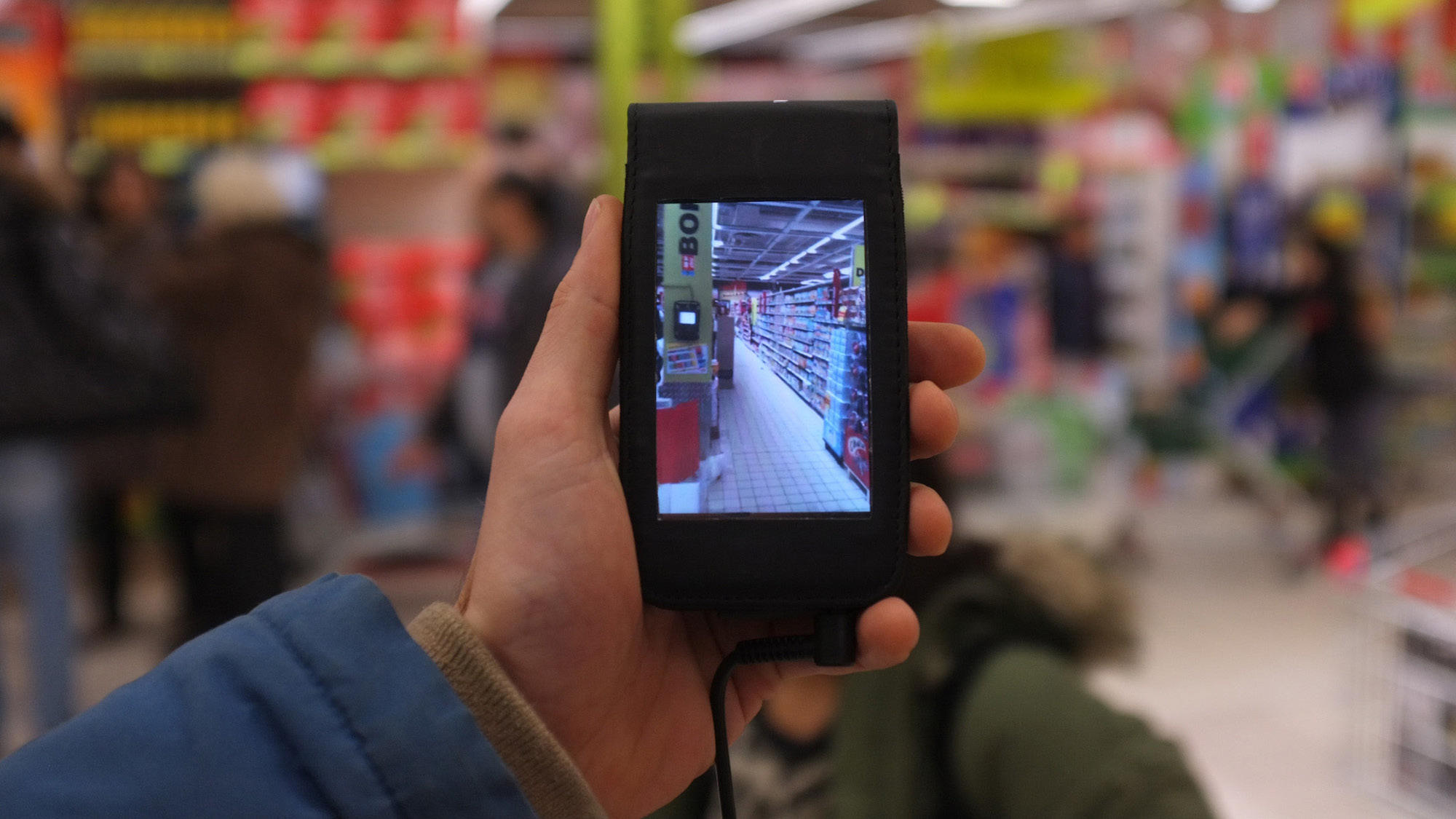 Ici-Même [here-itself], a Paris-based group founded by Mark Etc in 1993, produces a wide range of theatrical interventions and urban scenographies that question our relationship with our social and urban environment. After having established a reputation for itself, and being recognized for its agility to infiltrate reality and to mystify, Ici-Même has adopted a diametrically opposed approach in its recent creations, by placing spectators at the core of the narration, and, in the unequivocal words of Mark Etc, “are now at ease with inviting the general public.” After an initial attempt of a “video-guided tour of the city” in Allo Ici-Même in 2010, First Life was launched in 2013.

Ici-Même defines First Life as an augmented reality show for a sole spectator. Based on the principle of the spectator being video-guided by a film uploaded on a smartphone, First Life sets out to embody the hero of a fiction that takes places in those very sites to which the spectator is guided. Fictive spaces superimpose with the immediate environment by means of video. The ensuing sense of unease is augmented by the 3D sound environment in which the spectator is immersed, by the illusionist scenography, as well as by the intervention of live actors who reinforce the friction between reality and fiction.

Most First Life spectators spontaneously use the word “experience” to describe what they’ve undergone. Each experience is unique — a spectator who takes the same itinerary twice would not experience each in an identical fashion. The personal and almost intimate nature of this experience contributes to the confusion created between fiction and reality. The spectators’ emotional state at the outset is decisive and predisposes them to more or less embracing the experiment. Upon completing the experience, some are moved to tears, while others float in the air for a while, taking the time to “go come back down” and gather their wits. That which transpired in their bubble during the spectacle becomes a part of them.

The rule of the game consists in agreeing to play the puppet.

With First Life, spectators are aware from the outset that they will be steered by a narrative over which they have no control. The initial instructions outline how the video-guidance operates; the spectators agree to play along: the rule of the game consists in agreeing to play the puppet. They are not hoodwinked, however, by the experiment to which they lend themselves. “We are in the habit of controlling the smartphone, yet here, it is the smartphone that steers you; well, it may even be the case in real life!,” remarked one spectator, while another admitted: “That’s what’s unnerving, we’re in a position to film though we don’t film. We’re supposed to be the ones in control, whereas in fact we are the ones being controlled.” Ici-Même have taken the precaution of explaining this agreement to each spectator individually, reassuring him or her of the benevolent nature of the experiment. This reassurance has the effect of creating a symbolic safety net, enabling spectators to relativize the risk, all while appeasing or containing doubts induced by the posture of the “dual-I” they must assume from the beginning to the end of the adventure: they are at once bystanders and participating characters: they observe themselves assuming the role of a character. By underling the benevolence of the performative arrangement, Ici-Même also ensures the spectator’s collaboration. The performance’s success is contingent upon this mutual good will. “Immersion is not the means to turn the spectator into the experimental guinea pig. It’s more a way to touch without being touched, without leaving a mark, to touch as closely as possible something that would be deemed untouchable” explains Mark Etc, evoking our perception’s mechanisms that consciousness doesn’t control.

Disturbing, confusing, surprising, strange, unique, unprecedented, hallucinating, staggering, mesmerizing are but some of the terms spectators employ to describe First Life, thereby expressing the pleasure they experienced in playing the game. It’s a case of accessing a fictive space, in an interstitial dimension, a way of realizing the fantasy of penetrating the screen. “It’s complicated to explain, you have to do it, you’re at the heart of things, it’s to be experienced,” confided one spectator at the close of the performance. “We go along with something that isn’t us but which is supposed to be. We have a twofold view. By desisting the smartphone (of the eyes) a little, we have true vision. We’re caught between the two; we don’t know where we are, who we are, or where the film will lead us” was how another spectator described the experience. The script and staging reinforce this “dual-I” effect throughout the adventure by organizing discrepancies and coincidences as connecting points between fiction and reality.

The spectator’s physical involvement plays a fundamental role in this experience of ubiquity. The fundamental rule of play is that of the analogy of the gesture between the spectator and his/her avatar, opening a kind of doorway to fictive space: spectators cue their movements to the way their avatar moves in space, to the rhythm of its gait, to its dexterity, to its breathing patterns. Obvious differences (age, gender, body size and so on) entail spectators finding themselves in the skin of an other, and yet remaining themselves, thus engendering empathy. In this respect, the mirror is a powerful artifice. Mirror games superimpose fiction and reality, generating a world within worlds between fiction and reality: who is filming whom? Who is watching whom? At times spectators can even see their avatar’s reflection in a car window, or on a computer screen, without their character being aware of it. 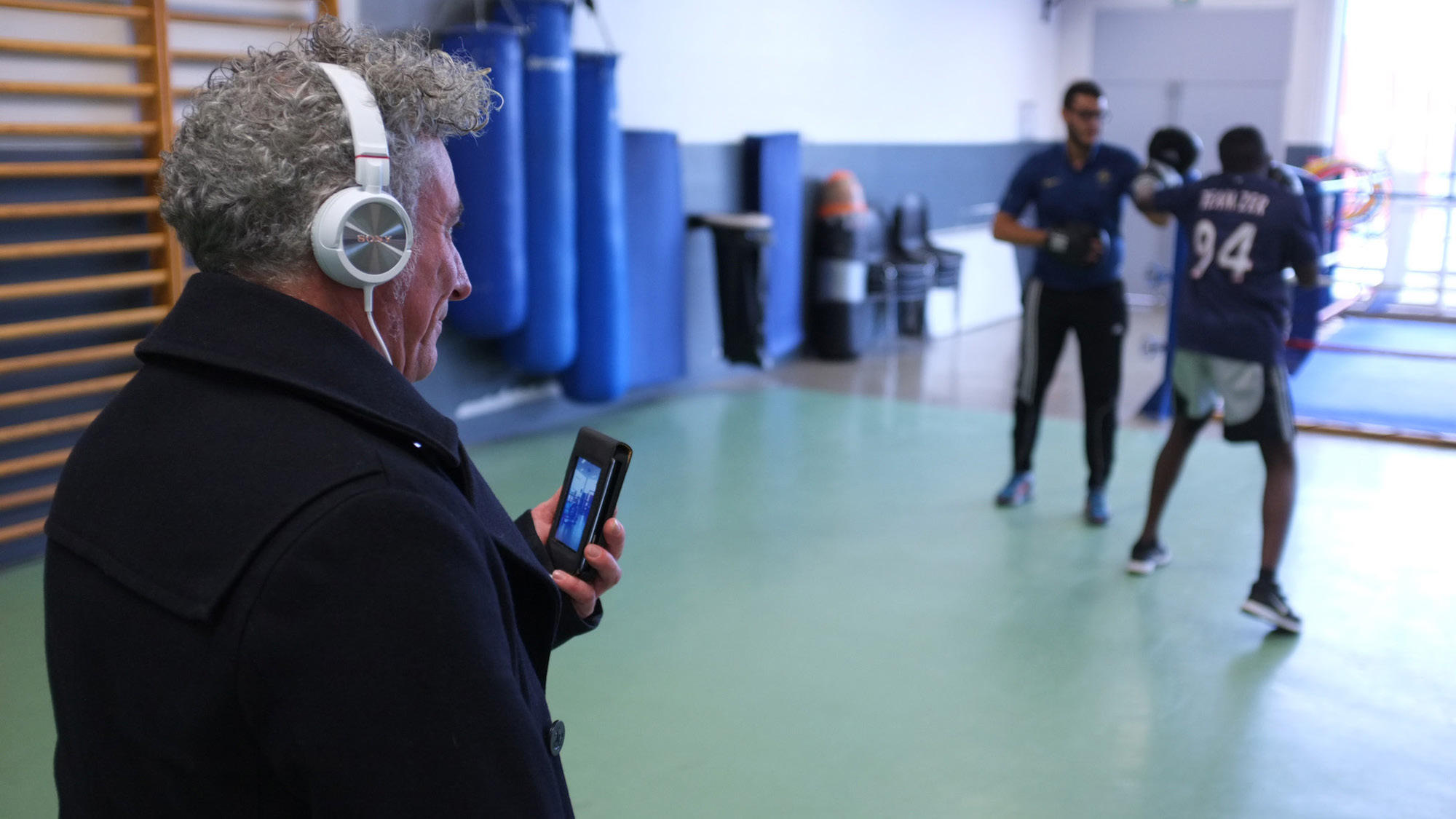 Those localities that First Life visits are rarely unknown to the participating public. But the scenography involved forces spectators to question where they find themselves, compelling them to delve behind the scenes or adopt a new point of view about a place, which they thought they were familiar with. In order that spectators can orient themselves without getting lost, the shooting and scenography has ensured that fixed landmarks are highlighted. The staging will generate confusion between fiction and reality by constantly fluctuating discrepancies and coincidences around these permanent features. Whenever during the performance Ici-Même seize a workplace or living space frequented by its habitual users — a retirement home, a town hall, a shopping mall — the discrepancies are subtler and the ensuing confusion is accentuated by fortuitous coincidences between the avatar’s filmed environment and the spectator’s immediate environment.

Ici-Même also plays with fiction codes to generate surprise effects. Hence, an opening door enables, just as an ellipse operates, an abrupt transition to another universe. Stepping through the door enables one go back in time or to be suddenly teleported elsewhere: the nursing home turns into a boarding school for young high-school girls, the swimming pool becomes a nightclub; the apartment squatted by migrants becomes a police station; the gym becomes a polling booth; the disused apartment transforms into mountainous landscape, and so forth.

Unlike images that preserve their fictional status from beginning to end, the soundtrack completely replaces the spectator’s natural sound environment. Given spectators wear their headphones throughout the adventure, one spectator commented: “Virtual sound becomes the real thing.” The 3D audio effect plunges spectators into an alternative reality, or into hyper-reality as Mark Etc characterizes it, meaning that it seems more true-to-life than nature itself. The sound recording is binaural, i.e. the sound recording device enables one reproduce natural three-dimensional listening, as a product of our auditory system, more so than a conventional stereophonic sound recording. This renders the virtual sound all the more realistic and credible. Thanks to 3D sound, First Life spectators can wander in “real” space all while remaining completely immersed in their avatar’s subjective sound environment.

Finally, and this represents an extra notch in the organized disorder between fiction and reality, certain characters materialize in “real” space, they take the opposite path to that of the spectator and emerge from the screen. Actors intervene live and challenge spectators who no longer know whether they’re supposed to play their avatar’s role, and thus respond to the actor, or to remain in their place as a bystander. Real space and fictive space coincide, thus further upsetting this ambiguous assignment of the spectator as someone between participant and bystander.

First Life does not put a spectator in a position of performing vis-à-vis other spectators, and yet affords him/her the opportunity to more or less get involved without the storyline being interrupted. Given the performative arrangement is designed for a single spectator, everyone can adjust their level of engagement, based on what they feel they are willing to do, trusting in their intimate cursor of letting go rather than possibly being coerced by the way in which others spectators look on. Even if the actors’ live intervention questions and addresses spectators directly, and disrupts him/her in their position as spectator, this does not necessarily lead to an exchange. This is the particularity of the in-between state generated by the ensuing effects of the confusion between fiction and reality. Moreover, it is a sign of this classic spectatorial convention known as the “fourth wall” which, despite everything, spectators are accustomed to observe. It is also a sign of the critical and aesthetic distance spectators preserve while not fully yielding to the control and the force of the immersive dispositive.