"The sense of belonging in a participative artistic creation" 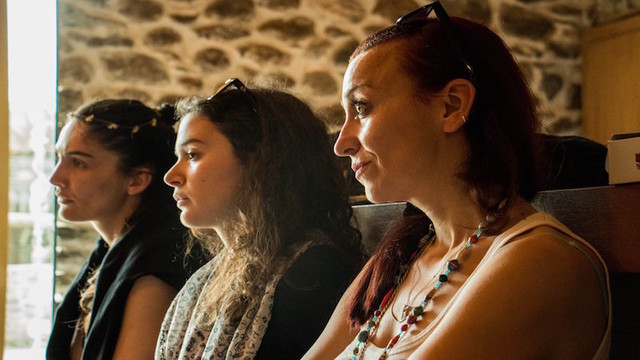 The event which took place in Prishtina and Junik brought together artists and IN SITU members as part of the inquiry on "The sense of belonging in a participative artistic creation". The entire event was organized around the concept of ODA.  In Albanian culture, ODA is a special room in communities, where the community gathers for a discussion on common issues. The specific of traditional ODA's is a dialogue through stories. The member of the community  presents the positioning by telling a story, either adapted or original. For opposing or approving a point you also tell a story. In the first day each artist had his/her time to present him/herself and the artistic project, while in the next days, ideas and presented projects were discussed in ODA way. The intention in the second part of the event was to adapt or reinvent stories that relate to the project idea, aiming to create a collective story with contributions from everyone.

Most of the artistic projects embraced topics that reflect the current developments. They explore issues related to current refugee/migrant crisis in the European Union countries, challenges in creating multicultural societies, street art and public involvement, cities and public spaces as artistic stages, as well as the concepts of shape (form), sign, sound, light, games and stories/storytelling.

The key note speech of the first day by Neil Butler, from UZ Arts in Scotland explored the relationship between artist, space and public, providing a good conceptual framework for the project presentations that followed. Four different approaches to art work were particularly highlighted, namely Community art, Socially engaged practice, Publically engaged practice and Co-creation. Co-creation as the current dominant approach, where public inspire creation or content or contribute to the delivery of artistic work, was central to the presented works. It was rightly concluded that the public becomes co-creator by telling their stories, visions, imagination and active participation. As it was illustrated by the works of paper boat, cardboard towers and others, artist has the imagination, but they can only achieve it through the direct involvement of the public.

The key note address was followed by open discussion, where country contexts were elaborated, presenting different approaches and realities. The artists brought local insights from country contexts, from France of street art to Germany of almost no artist working in the public space to Italy’s almost 70% of budget which goes to opera to Kosovo of journalist that see public art as a no value art and to Check Republic of festivals that are looking for their audiences. The issue of ownership, respectively the dilemma of “whom does the art belong to” brought another conceptual dimension to the discussion. In relation to that, the discussion of the arts as a means for a different end was particularly explored.

Instrumentalization of art, using art for having an end (social empowerment, economic, tourism. Art is always there for another purpose contrasted with the arts as human rights. In the Kosovo context, where arts and culture remain distant from the public policy attention, instrumentalization, namely using arts as a means towards another end, is considered the only way of bringing arts higher in policy priority. It is only by linking arts and i.e. economic development that policy makers would take a more favorable stance on cultural policy development. 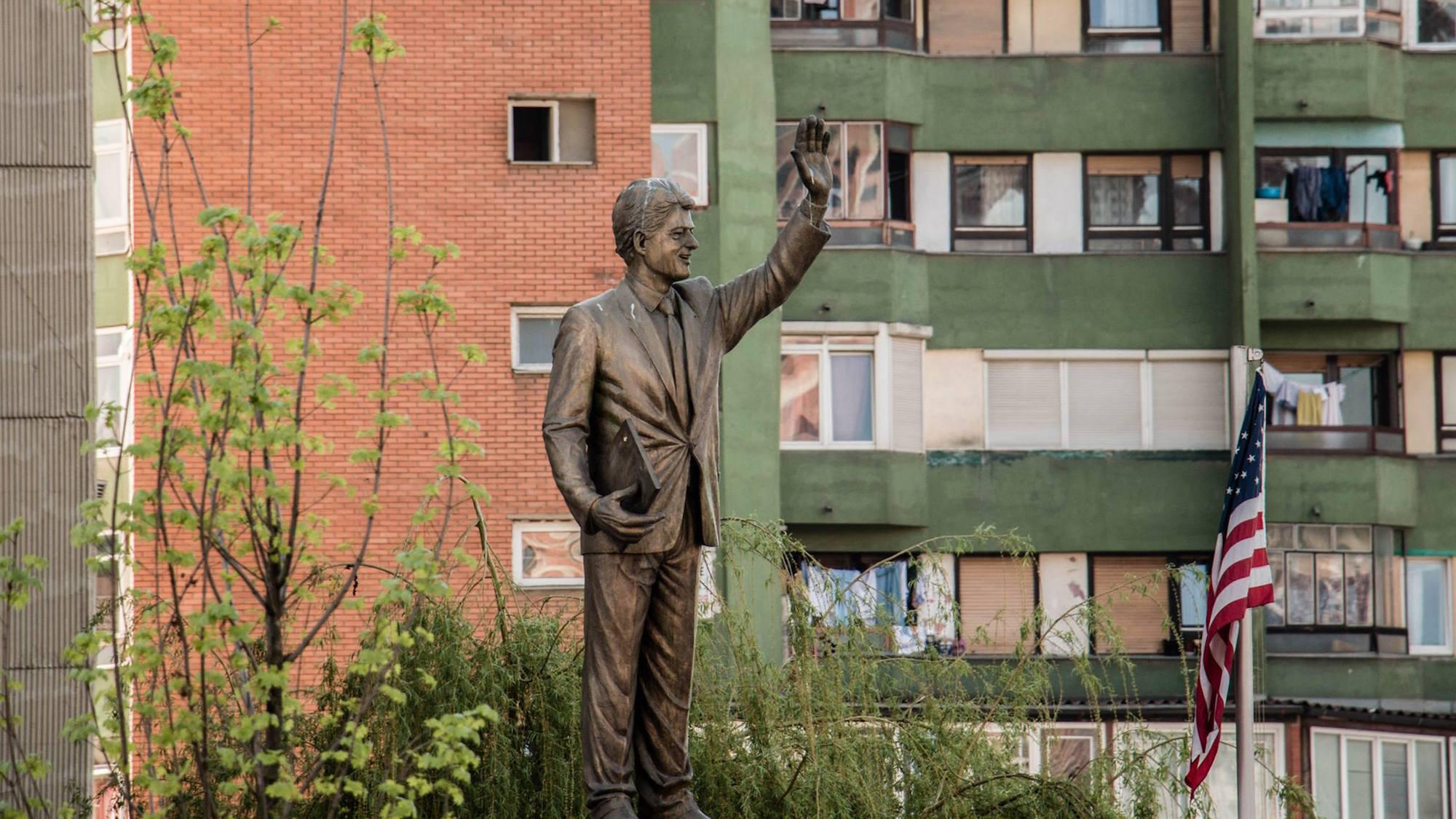 Bill Clinton Statue in the center of Pristina © Maxime Demartin

A quick feedback on presentations

Christophe Chatelain (Geopolis), a work where communication with the audience uses no linguistic preconception and starts with an almost empty scenery and ends up with dramatic scenes of flames, fireworks and chaos, symbolizing the current reality in the world (a world in fire, in artists words). One of the strongest points is the attempt to make the audience feel foreign for the first time and create the interaction with the characters, which is a very good way of engaging public in delivering the artwork. Geopolis is one of many artworks that come in response to the latest crisis in the world and Europe. It is another actualization of the dilemma regarding the position of artists in a rapidly changing society (world) and global turbulences, especially following the November 2015 events and other more recent ones. Trying to reach empathy within the audience is one of the main goals of the artist. However, the aim should be to provide the spectator another vision on current migration crisis and other affairs, but not necessary insist on reaching empathy, but let and observe people react the way they feel like.

Matteo Uguzzoni (Games for change), a web page with games you can play in your city. A very creative approach to gaming where people are invited to shut down their computers and get to the street to perform games, as well take pictures and upload them online. The project’s unique feature is its focus on the social aspect of the games. People love social games, games have the power to bring people together and create shared memories (in Matteo’s words). The artist is exploring ways to shift his role from the game master and allow games to be set up and played by participants themselves. The presentation of the artist gives a strong impression that his philosophical and conceptual search through the gaming fetish and better understanding that relation would lead to more urban games.

Jan Pfeiffer (Support Point III) started with a story on drawings of the city of Sofia before visiting it and artists chance to compare them after visiting the city, an awakening experience for his work. Jan has a particular interest on how cities got transformed in the post communist (post totalitarian) era. This constitutes a highly important area to explore, especially for Central and South Eastern European countries, as there are many shared experiences across these countries. For example, part of Jan’s work and inquiry are similar to the questions raised by Agnes for forgotten monuments of socialism in Kosovo and these two projects can perfectly communicate. The project explores the power and meaning of shape and pattern of objects or the visual language of shapes and signs, in the words of Jan – his philosophical inquiry through the meaning of symbols.

Agnes Nokshiqi (I dance you) explores forgotten public spaces in Prishtina, focusing on socialist era monuments/sculptures, located in the areas that are empty today, whereas they used to be full of life. The literary inspiration of her project is Anton Chekhov’s play ‘Three sisters’, the drama of the sisters who are stuck, want to move out of the provincial city they are living in but cannot. Agnes’ inquiry through the abandoned public spaces of Prishtina is an attempt to find the answers for the questions like: what is the feeling when you think of the city, how you will describe your city-location, what would you like to share with the world. Agnes’ work is of a particular importance for Kosovo and its cities which underwent several urban transformations in the last century. Prishtina in particular is in a desperate need of memory projects and searching through abandoned places and forgotten monuments is a great contribution to the city, its urban and cultural landscape. 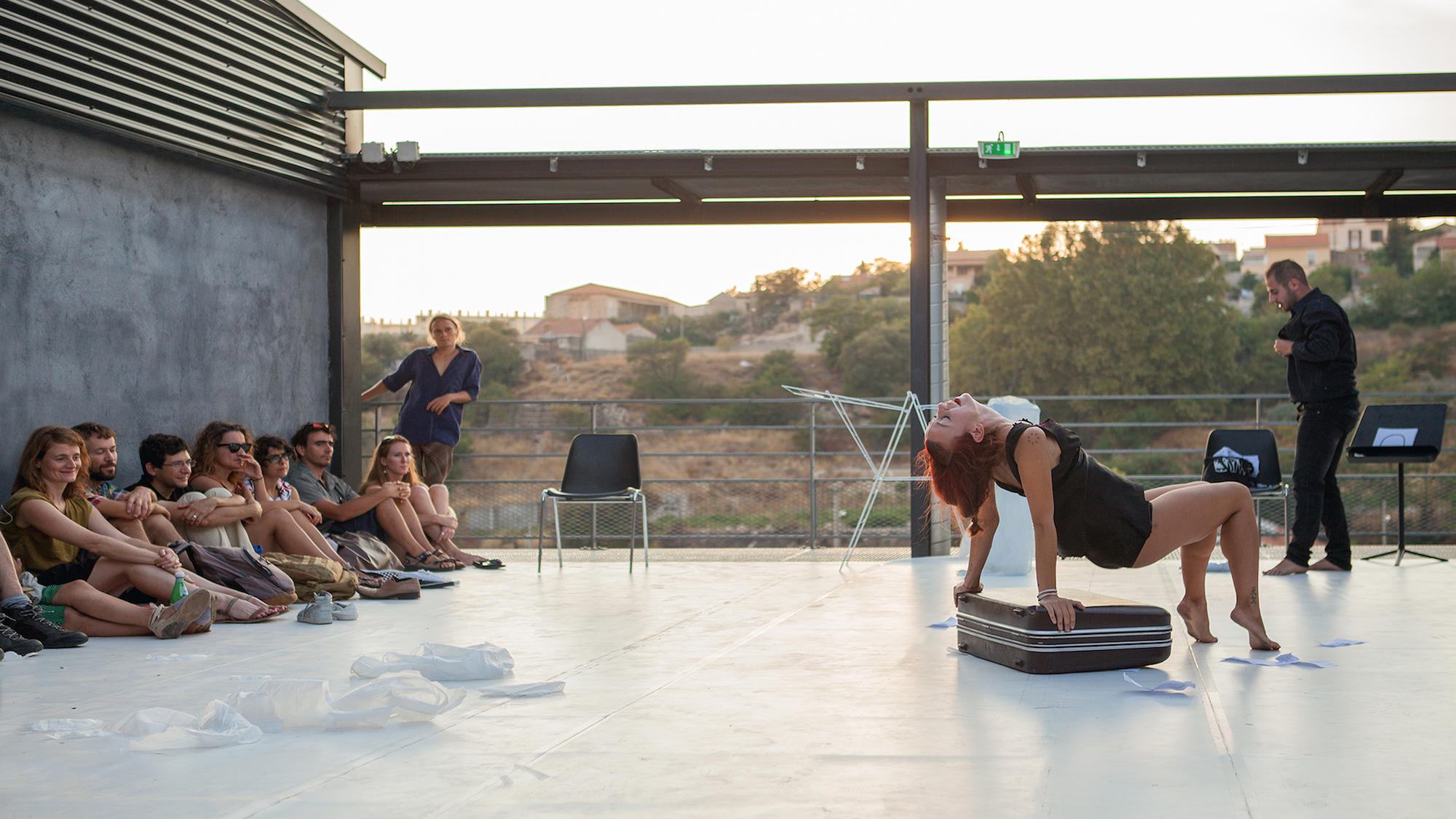 Frank Bölter (Refugee Origami Camp Detmold) initially presented his previous works, including the Berlin cardboard wall in Belgrade, paper tank and paperboat good, as a very good conceptual introduction to his project idea. Refugee Origami Camp Detmold is a collaborative action, with legal and illegal refugees building paper houses to stimulate a societal discussion about the place of refugees in our societies. The focus in this program is on the current refugees crisis and searching for ways how to make refugees part of European society. The project essentially looks at the question of cohabitation of different cultural/ethnic groups in the European context.

Saffy Setohy (Light Field) looks at how people behave in the landscape and how things move and change, including how light is changing people’s perceptions. The project explores realities created by the interaction of movement, sound, light and site. She has experimented with the gadget that produces light and sound, while the performance would invite dozens of people in a dark space, each having holding the gadget and producing light and sound at the same time. She is particularly interested in the social aspect of what happens when you give people a task or invite to a game. Some challenges/questions that remain before the work is implemented: gadgets need developing, involvement of others (participatory approach), how much instructions do people need (maybe not giving any instruction, just leave the devices there), how to transform this into a school program (educational).

Doriane Moretus (Immortels) tackles the question ‘what is like to be young today’, exploring through the life experiences from childhood to adulthood, paying particular attention to the young people of 18-25 age group. This theatre dance project has two parts: the nest and the fight. 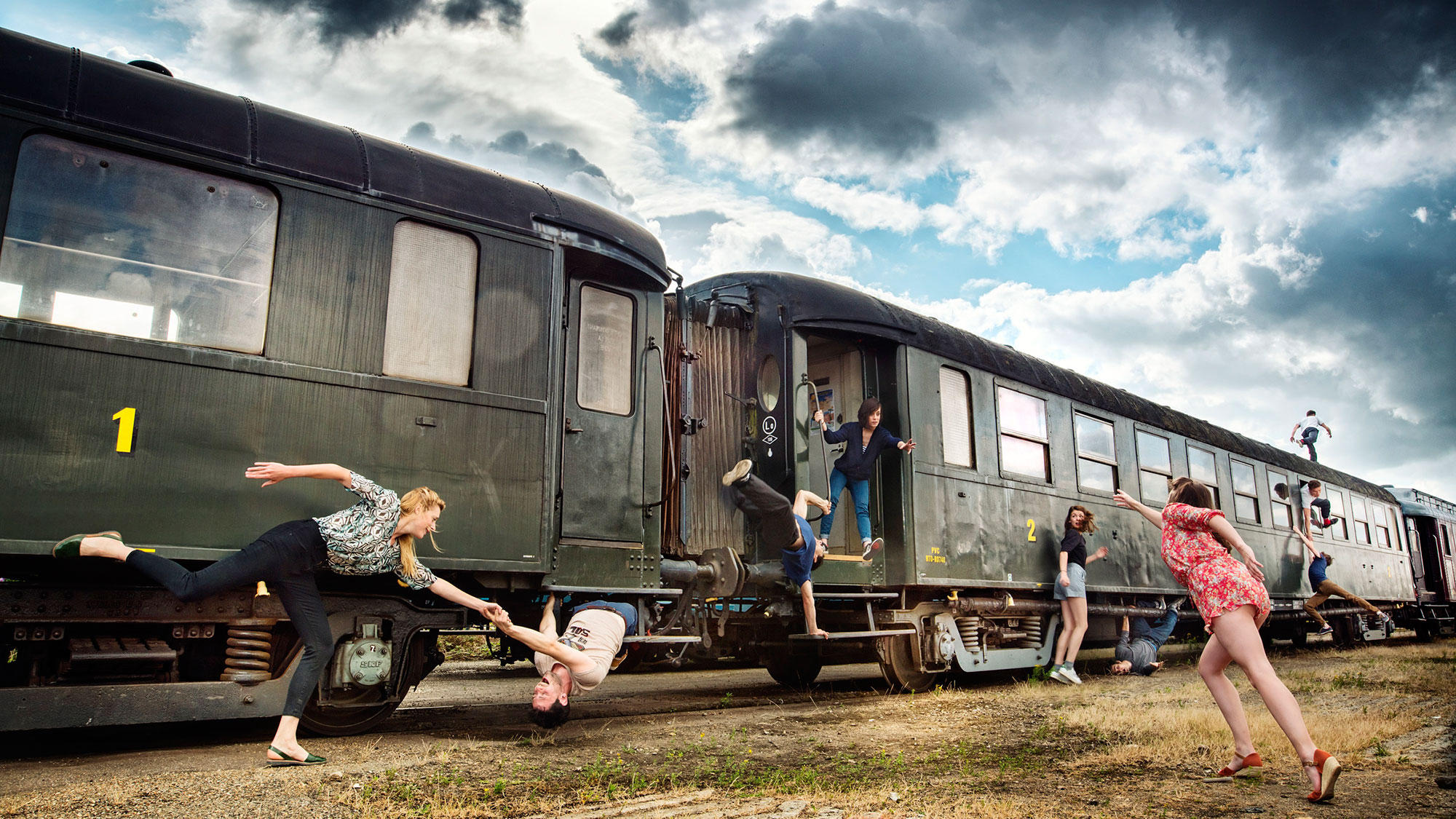 After three inspiring days in Prishtina, we witness a highly creative approaches from seven artists and their project presented. The shapes and forms of artistic expressions chosen by the artists are all well thought, provoking and inspiring. While at the level of audience engagement not all projects have the same desired engagement and same level of shared sense of belonging with the public. While project are yet to be developed further we are waiting forward to witness further stages of these wonderful projects and eager to be part of these sevens participatory art practices from seven different corners of Europe. 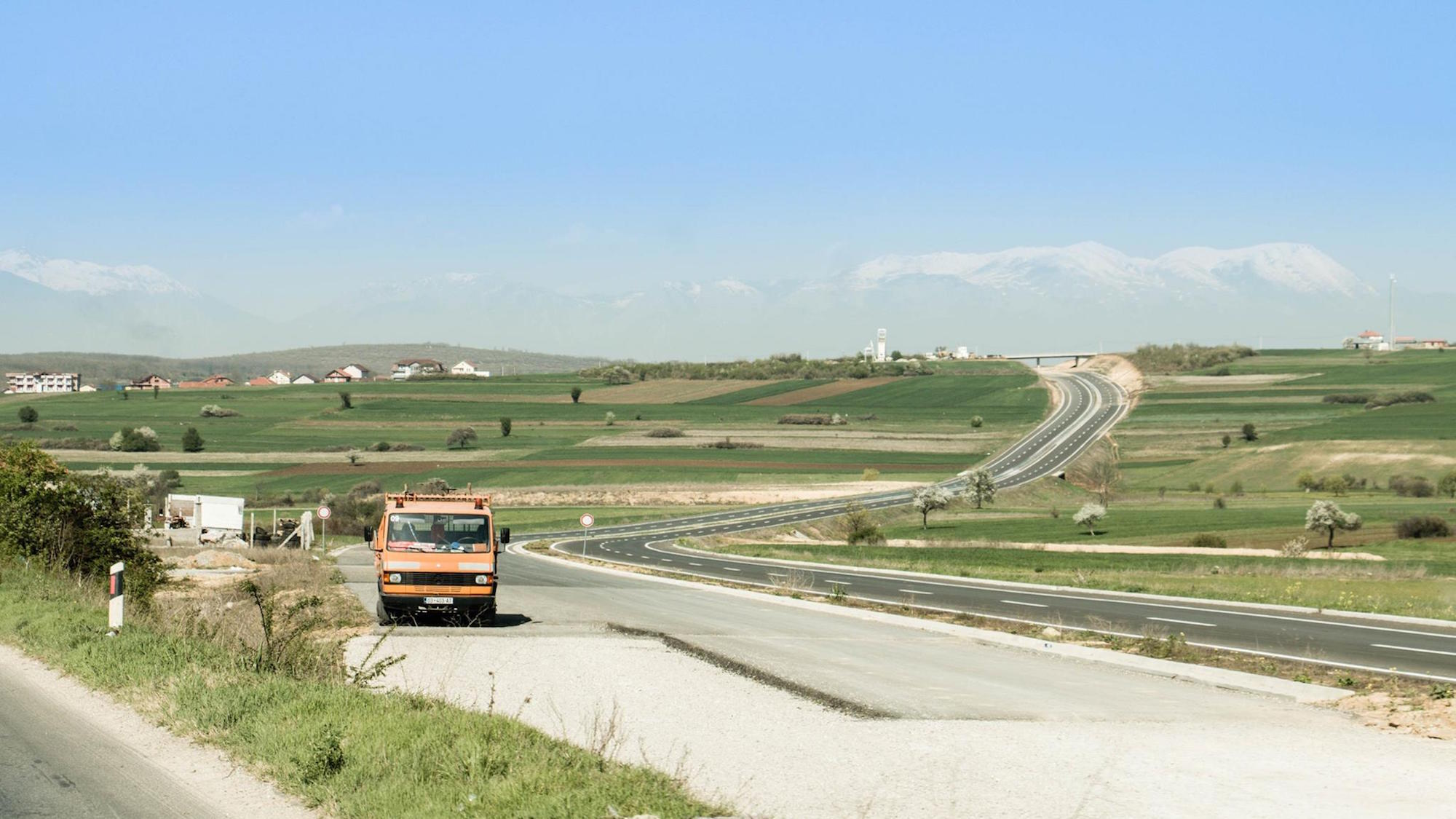