A continuous theatrical investigation into the future of democracy: Episode 3/3 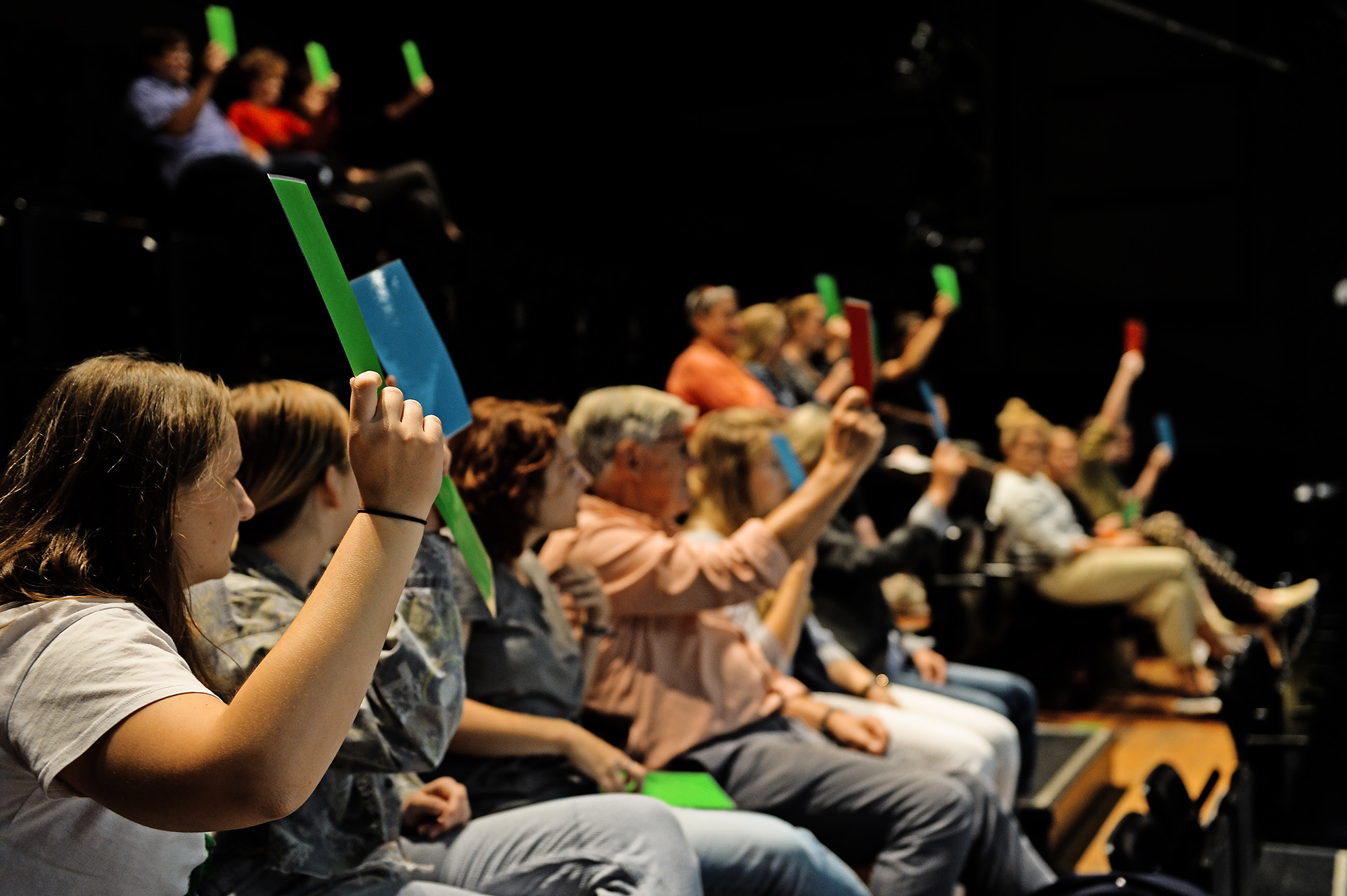 For the IN SITU pilot project In Search of Democracy 3.0, Lucas de Man and his team of Stichting Nieuwe Heldenwork work together with IN SITU partners to make an investigation of current democracy and its challenges for the future.

In Search of Democracy 3.0: to strengthen the feeling of power we have as a group

In Search of Democracy is a search for Democracy 3.0. ‘Democracy’ – our Western interpretation of it in any case – has roughly had two previous versions. Firstly, there is the democracy of the ancient Greeks – who got their ideas from the Phoenicians and Mesopotamians. The idea that they invented it themselves is a myth. Secondly, you have the Enlightenment version, which is partly based on the ideas that emerged in that period.

Now we’re seeing that an update is needed: Democracy 3.0. How, what, why exactly, we don't know yet. If we knew that, we would have created a political party, because then we would set an example ourselves. What we are doing instead is travelling through Europe for three years to shape our project and seek democratic reform. The project has several layers: it is partly a performance and partly a large media project. It includes short documentaries and we interview democratic innovators, citizens and the public. The aim of the performances we give is to actively seek new answers to the question of how we shape our democracy, together with the audience.What is striking every time is how much is already going on among ordinary people in terms of initiatives and positive civil disobedience. I have already seen some fantastic projects.

Communities that jointly decide to switch to wind energy, for example, or the case of the roofing of the ring road around Antwerp. In the procedures surrounding that project, the government made corrupt decisions. A group of citizens said no, that’s not how we’re going to do it. They started a court case and have prepared documentation for even more. The outcome is a benefit for citizens: the local government must now choose the most expensive, most citizen-friendly solutions. That’s encouraging. For me, that strengthens the feeling of power we have.

"I’m actually someone who sometimes thinks: ‘What exactly can you get done as an individual?’ And that is indeed quite limited from an individual point of view, but as a group the answer turns out to be: ‘a lot’.” 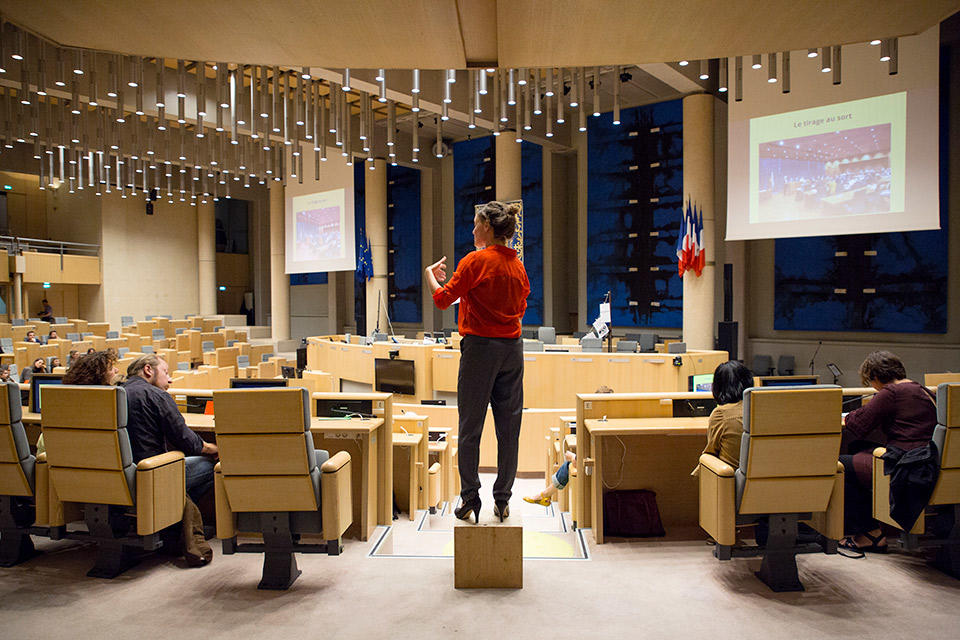 In Search of Democracy 3.0 © Grégoire Edouard

For me, the essence of democracy is to take into account those who have no voice. That's the hardest part of all, and it's also harder to sell, because you have to stand up for someone else, someone who's less articulate, someone who doesn't understand how the game is played. Suppose there are two districts. One district is full of articulate citizens, the other less articulate. One can determine everything, by knowing the laws, by being organized. Politicians are terrified of such a neighbourhood. They give and do everything for them. This makes the other district fall twice as hard.

Our appeal is for people to find their strength as citizens. We want people to stand up not only for themselves, but also for others. In practice, we’re asking people to work twice as hard. But it’s simply necessary.

We realize that this is only possible through faith in another story. And big stories are rarely heard in the current political discourse, but artists can do even more: they can tell the big stories. We strive for a bigger story without sounding woolly or vague. How do you make a more social dream come true, where do you set the new horizon that citizens can pursue together?

When people regain faith in themselves and others, they dare to feel responsibility for the whole. The whole thing is called earth, nature; it’s more than a little heap of people.

Humanity is particularly vulnerable, but it is the source of the most beautiful things. Democracy is about enabling the vulnerable to flourish and protecting them.

"What makes Europe Europe? In Europe, you can doubt. We have democracy and we can act according to the doubt. I hope to convey that with our project." 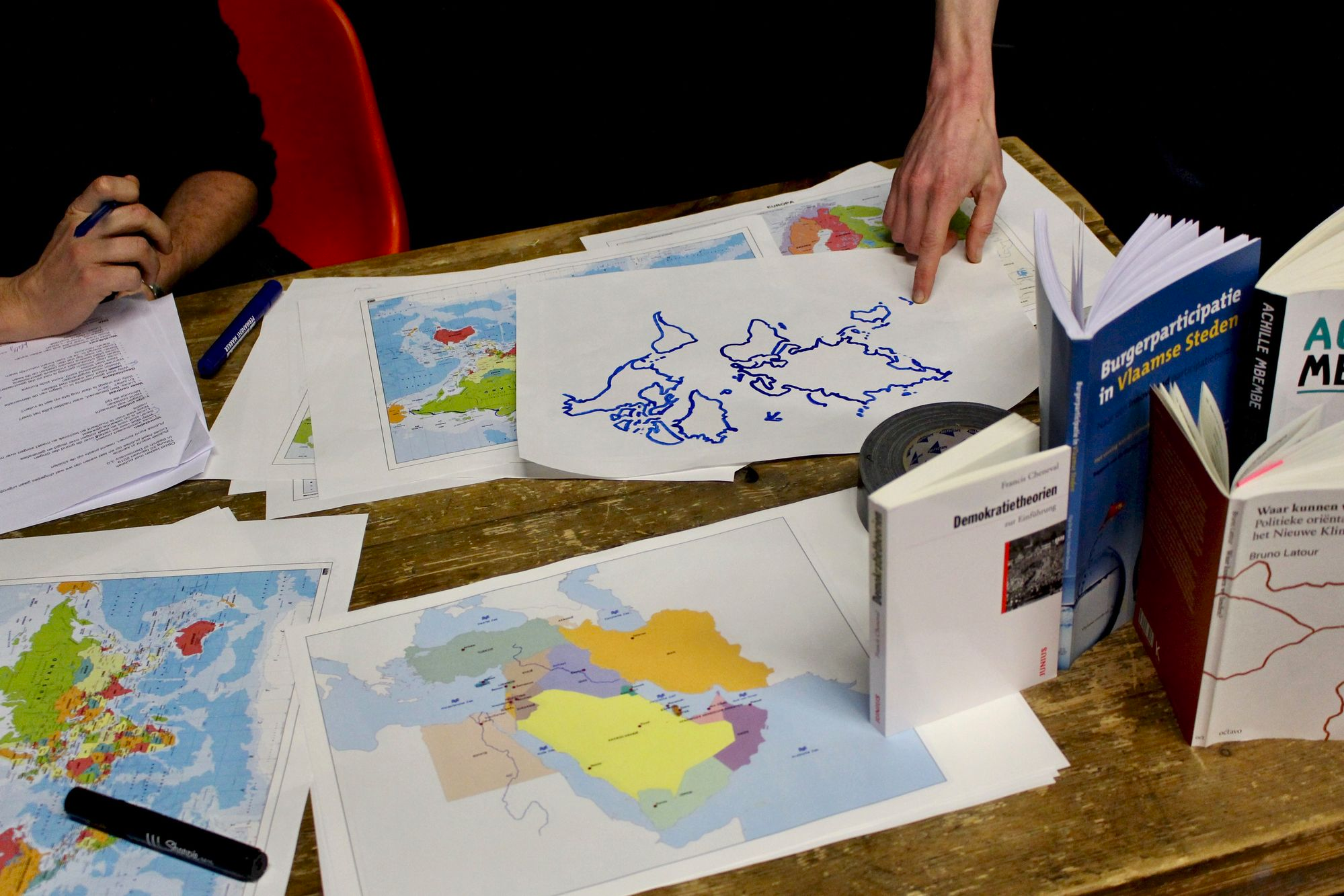 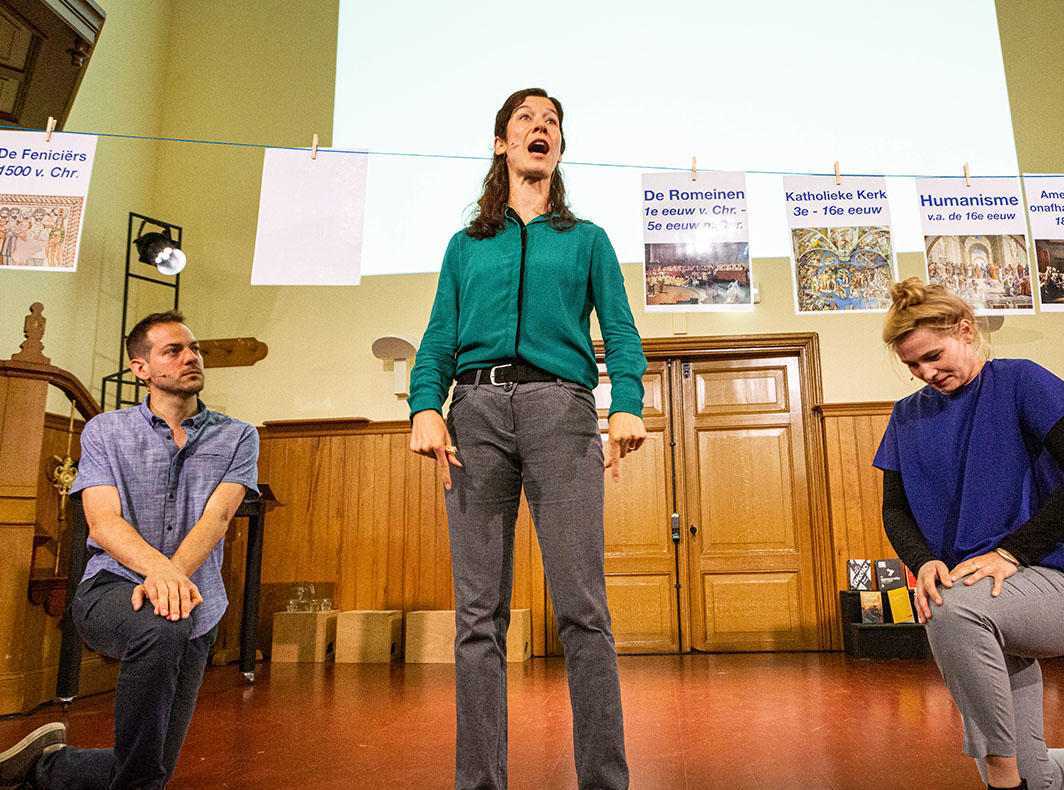 In Search of Democracy 3.0 © Moon Saris

To address the performance to local issues (Moss, Norway)

Lucas’ project poses an intriguing investigation into contemporary expressions of Democracy, which is inextricably linked to public space. Democracy is threatened in Europe and elsewhere, and Lucas proposes to confront these challenges through a research process that leads to an interactive performance. The project has dimensions that can taylor theatrical and research experiences to a local context, and juxtapose these against an international framework. I’m looking forward to welcome Lucas and his crew to Norway, where we’ll work together in the town of Moss.

The town represents a special case because of the changes it’s going through. It has a population of around 30.000 which will grown to 45.000 in 2020 through a merger with a neighbouring city. Moss is undergoing a tremendous amount of renewal,  with a construction boom and major infrastructure investments following three decades of de-industrialisation. The town also identifies itself with the establishment of democratic rule in Norway through the Moss Convention of 1814.The general gist is that Christian Fredrik (a Danish prince who was to be a Norwegian king) negotiated a peaceful settlement with Swedish generals. Norway was allowed to establish its own parliament and constitution, while accepting to be represented by the Swedish crown in all international matters. This laid the foundations for the modern state of Norway, which achieved sovereignty in 1905 for the first time in nearly four centuries. The reason that this came about was the end of the Napoleonic wars, where Denmark sided with France, and was obliged to give Norway to Sweden as the spoils of war. It is not coincidental that In Search of Democracy 3.0 will be presented in cooperation with Christian Fredrik-days, a local festival that celebrates peace, freedom, and democracy. It will be interesting to follow developments as Lucas and his team investigate the circumstances in Moss, and how they address their performance to local issues. The town is currently between two major crises.

The first was over the placement of a tunnel for the train and a new train station, which requires the demolition of an old neighborhood as well as the container harbour and ferry pier. This work is now proceeding, while the battles over what is to be built in this area (aside from the station) loom on the horizon. A variety of stakeholders – from local and national government, to private property developers and local residents – further complexify the situation. This raises critical questions about who will participate in these decisions, what processes will be employed, and who will benefit the most. Current trends in Norwegian property development tend to favour the few and not the many, to borrow a phrase from the British Labour Party.The area where these developments are occurring is premium, waterfront real estate along the harbour on Oslofjord, and in the center of town.

This leads to fundamental questions about how much of this area may be privatised, and how much will remain public space that may be enjoyed by a greater diversity of inhabitants. Interestingly, it is Bane Nor, the state-owned rail management company, that is eagerly planning to privatise the area for maximal profit. And while these decisions are playing out on a smaller scale in Moss, they are reflective of trends that are manifesting throughout Europe. Through Lucas’ performance we may be able to shed an alternate light upon the mechanisms of local democracy. His team will engage local inhabitants as a part of their research, which will then color the local manifestation of his European project. We are also discussing the prospect of producing a short documentary video, and extending the performance in the form of an interactive installation in public space.

"My biggest hope for Lucas’ project is that it will contribute to improving the quality of the discourse here in Moss."

Follow the creation process of the project on: www.insearchofdemocracy.com

Biographies:
- Lucas de Man is the founder and artistic director of the Dutch Company New Heroes. He works as well as a (freelance) director, actor and concept developer and presents several art shows on Dutch national television. He is the Creative Leader of In Search of Democracy 3.0.
- James Moore is curator-producer for Østfold kulturutvikling – Avd. Scenekunst, the Norwegian IN SITU partner. He has participated in the coproduction of Lucas de Man project and followed its artistic developments. He will welcome the project in Norway in 2020. 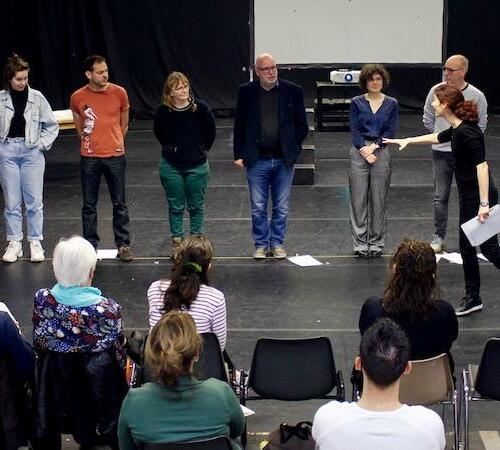 A continuous theatrical investigation into the future of democracy: Episode 1/3 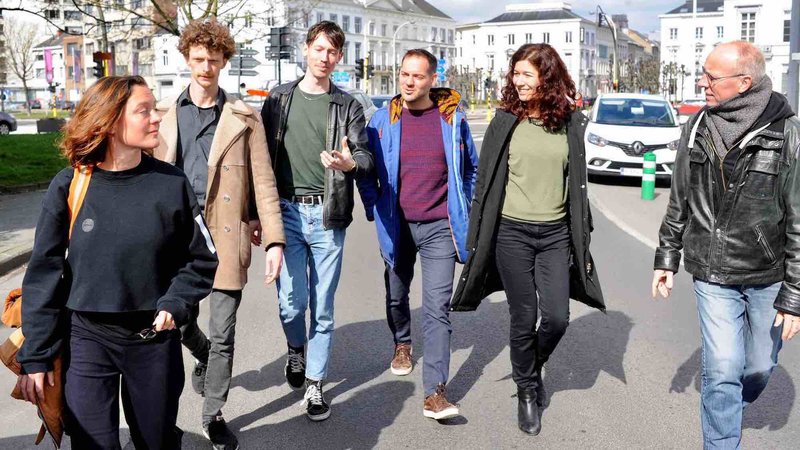 A continuous theatrical investigation into the future of democracy: Episode 2/3

In this second episode, the team explains about the research they did to nourish the performance and the media project.