Acupuncture #2: "Hospitable, hostile? The place of women in public space" 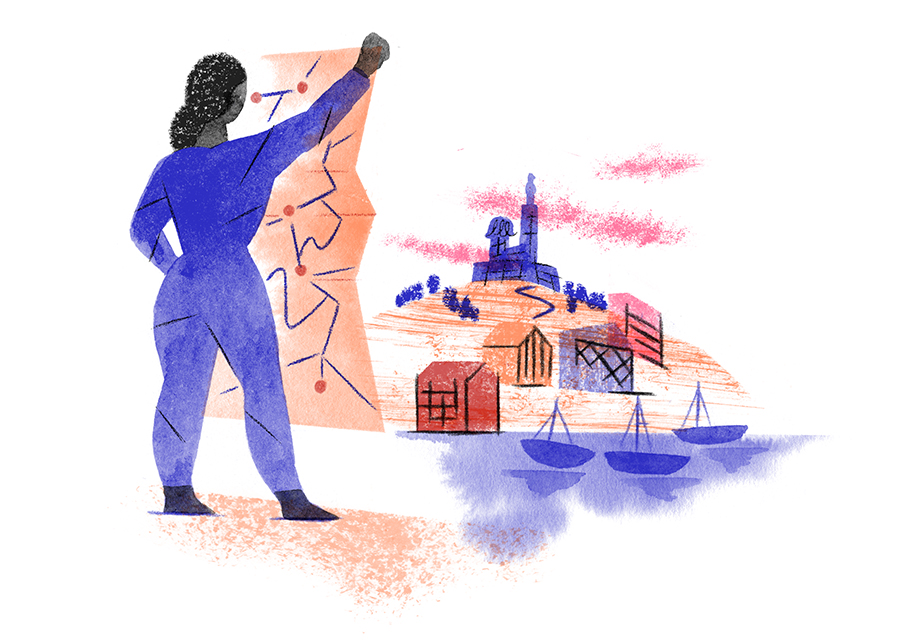 With a background in anthropology and a practice that often involves concerns about women’s rights, Maria Sideri focused her artistic research in Marseille on the elements of dominance and accessibility that constantly define public space. In close collaboration with Lieux publics, based in Marseille (France), Maria Sideri started her "Artistic Acupuncture" by exploring different districts of the city and by encountering many people who informed her field trip.

In her short essay Street Haunting: A London Adventure, written in 1930, the British writer Virginia Woolf described her personal experiences of walking alone through the streets of London. With a flâneuse attitude, a curious and sensitive gaze, she was exploring the different layers of human and social life in public space, paying special attention to the individuals that inhabit it.

In her own words, the best moment to get out and explore the city was during the evening, so as to gain the anonymity that provides us with that extra layer of freedom:

“The evening hour, too, gives us the irresponsibility which darkness and lamplight bestow. We are no longer quite ourselves. As we step out of the house on a fine evening between four and six, we shed the self our friends know us by and become part of that vast republican army of anonymous trampers, whose society is so agreeable after the solitude of one’s own room”.

Getting out of the house – escaping from the ‘private room’ and all its inherent connotations – was first and foremost a statement of freedom and a way to claim access to public space and the sparkling life offered by the city at night.

Throughout her evening explorations, Virginia Woolf was observing the context like an artist in public space, constantly giving, assigning and reformulating meaning to the movable scenery of the city and its active inhabitants. Her walks through London were driven by a sense of selfconfidence and trust, following the detours and the hidden corners of the big city with an innocent and trusting enthusiasm.

The London of the 1930s was, in any case, very different to the city a few decades before, especially for a woman walking alone. As reported by Rebecca Solnit – who wrote a comprehensive history of walking [1], with specific passages focused on the solitary stroller or on the connections between women, sex and public space – there have been several moments in the history of many European countries, where women could have been even arrested for prostitution if they were walking alone in specific places and at specific times. As Solnit says:

“In eighteenthcentury London and Paris, going out anywhere at night was as dangerous as the worst slums are supposed to be nowadays”.

This unstable equilibrium between the freedom of walking alone and the constraints of avoiding some areas of the city – with all their threats, risks and dangers – is somehow a universal condition which we could find in many different places around the world. The ‘hospitable and the hostile’ are very often two sides of the same story and, in the growing contemporary cities, with expanding suburbs and mixed populations, we find a great complexity that needs to be addressed without falling into easy stereotypes.

In that complex situation – and within the context of the acupuncture missions – the artist Maria Sideri developed her research and proposal focused on the place of women in public space in the city of Marseille.

(In)Accessible? The hidden geographies of women in public space

The artist’s considerations make us think about the vital importance of issues such as:• Taking care of public space is a basic necessity;• The element of participation, that becomes a fundamentalmechanism to generate inclusive urban policies;• Sensitivity to cultural diversity.

All these aspects are also clearly reflected in the views of the people the artist met during her field trip. According to a professional working at Marseille municipality in the department for city centre social policy:

“It’s fundamental to focus on how to involve the residents in urban renewal. It should be a legal obligation to do that”.

In this sense, local authorities should be much more proactive in involving all citizens in the development of public space, providing the tools, the autonomy and a safe context for dialogue, exchange and negotiation.

In contrast, the architect Corinne Vezzoni regrets the lack of respect for public space and the lack of concrete action by the local authority:

“Marseille has made the choice to eliminate plants, due to lack of means, and to abandon the fight against antisocial behaviour. The only remaining green spaces in the city are in courtyards, in the middle of buildings, outside public space. It's the lack of respect for public space which has, among other things, led to this situation”.

Other interesting insights came from the female students of a ‘School of Space and Events Design’, who highlighted some practical needs that would improve the use of public space:

“We would like to introduce more outdoor games and activities in the city of Marseille, install public toilets, improve lighting in certain areas and be able to use public transport at night”.

Moving through these diverse visions, suggestions and concerns, Maria Sideri came up with a proposal for a mapping performative project called Assemblage.

The idea she develops in her proposal takes the shape of a material object, emerging from the development of different phases: 1) The collection of data; 2) The drawing of an alternative map of the city and its physical construction as a light box object; 3) A performative presentation of the map

For the first phase, the artist proposes to deepen the research about women’s strategies to walk the city safely. The collection of data would be done with groups of women in collaboration with local organizations that could be those she met during the acupuncture, such as Ambassade du Turfu (a co-working space coordinated by Collectif ETC, a collective of architects), the Amicale du Nid (an association working with people involved in prostitution) and other socio-cultural agents deeply engaged in the urban life of Marseille.

Once the diverse stories and the trajectories of women who walk (or deliberately avoid) certain areas of public space have been collected, the artist proposes to work with a graphic designer in order to create a drawing of an alternative map, a utopian representation, of the city. Afterwards, the drawing will be transposed into a light box that would ideally be installed in the train station or used to illuminate a dark corner of some street of the city. 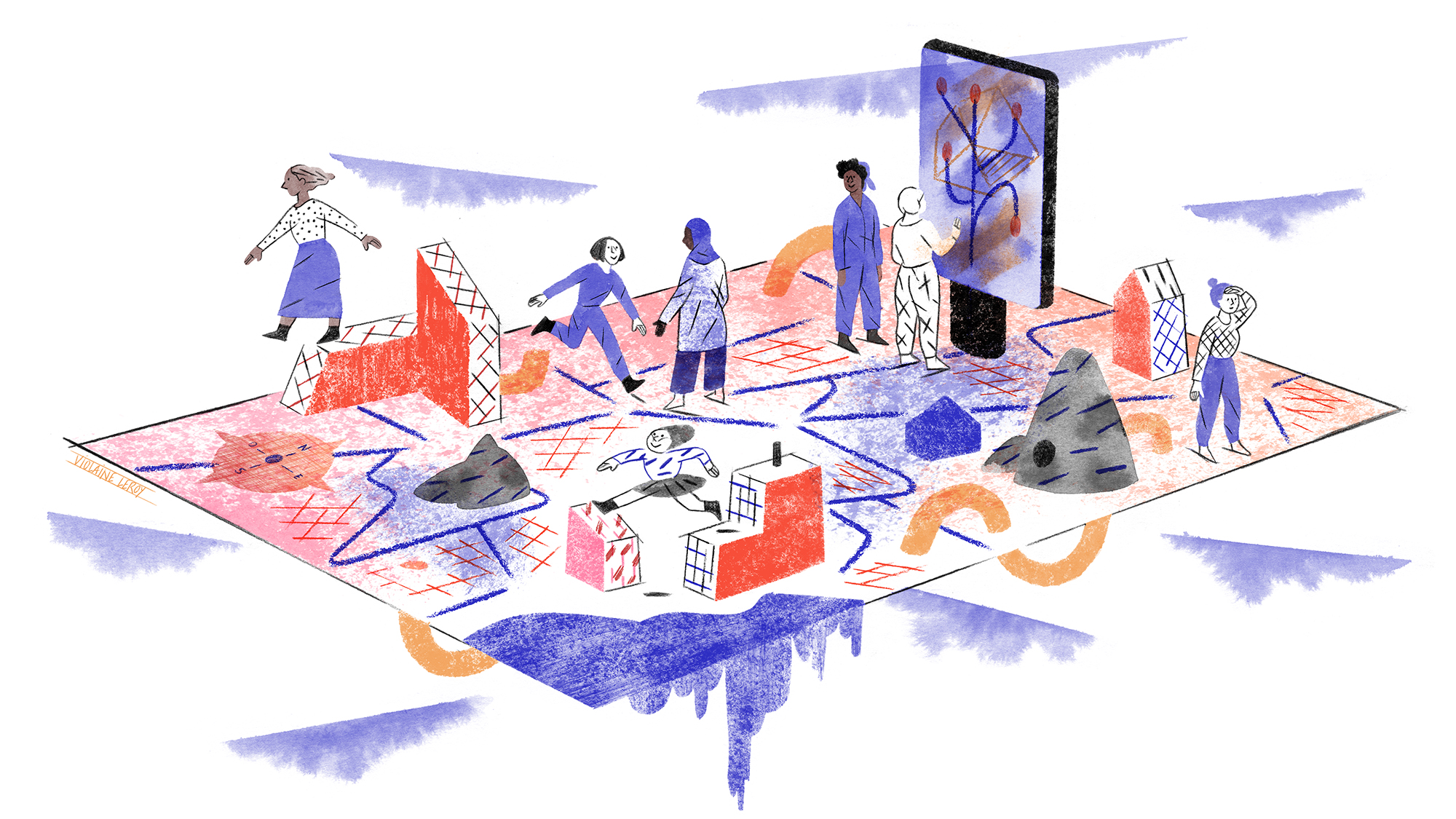 The final phase would introduce a vocal-textual element to the map. The different groups and communities of women involved in the project would write a manifesto that would be performed alongside the installation ofthe map. The performance would move through different neighbourhoods of the city.The map and the manifesto become therefore the voices of the women that tell their stories about their place in public space. The different layers of the artistic proposal show the hidden trajectories, the places women won’t go, the places considered dangerous or not accessible; and they make the women’s strategies more visible, providing an alternative map that is more human and sensitive.

A plural space with no universal answers

The research and the proposal developed by Maria Sideri shows that a city is full of complexities and public space – its role, use, access and perception – varies considerably depending on the different areas and the social geographies that inhabit it. According to her words:“I find it necessary to underline that the cultural variety of the city requires one to consider the different layers of this issue with care”.In a multicultural context like that of Marseille, there are no universal answers to the place of women in public space. As stressed by a sociologist in one of the encounters with the artist: “We have to start talking about public spaces in plural and not as a singular space. This will open a wider conversation around who occupies these spaces and how”. Diverse citizens, as well as the local authorities, clearly play a fundamental role in regard to those issues and, along that subtle border between exclusion and inclusion, segregation and openness, isolation and accessibility, hospitality and hostility, emerges the essential value of ‘taking care’.Beyond the central aspect of caring, talking about women in public space means having the right to experience life, to walk without constraints or enforced strategies, to access freely all the hidden corners and detours ofurban space. As Virginia Woolf said in the conclusion to her short essay:“And what greater delight and wonder can there be than to leave the straight lines of personality and deviate into those footpaths that lead beneath brambles and thick tree trunks into the heart of the forest where live those wild beasts, our fellow men? That is true: to escape is the greatest of pleasures; street haunting in winter the greatest of adventures”.Maria Sideri sheds more light on this delicate issue, making the maps of Marseille mirroring the living atmosphere of the streets through the lens of the women’s collectives.