Let the Sunshine in 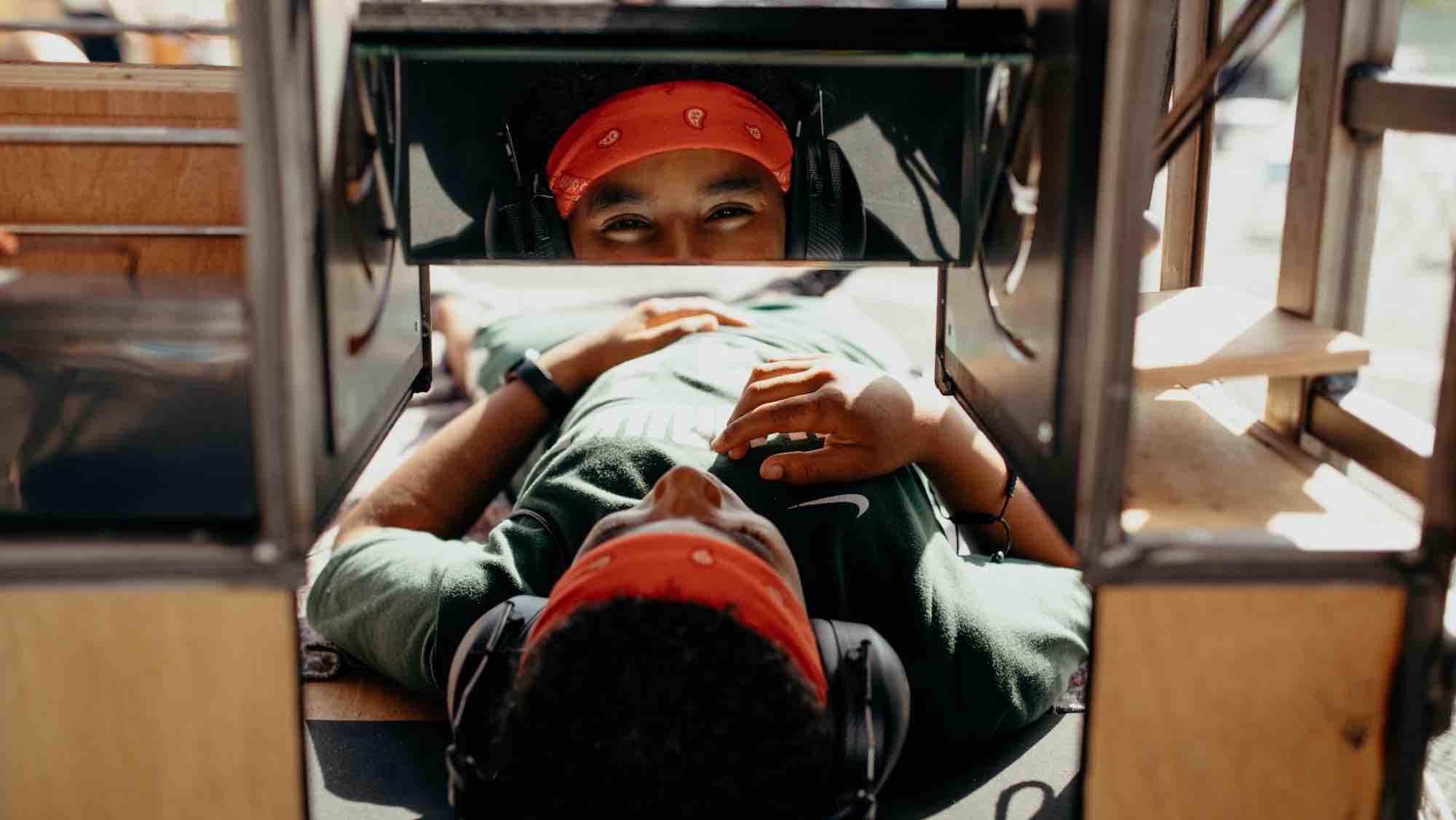 In a strained political context, Viva Cité 2019 succeeded in putting on a peaceful event in a number of city districts, and especially at the foot of residential housing blocks...

At Place de l’Hôtel de Ville, and along the west-facing façade of the Gascogne building, it was soaring temperatures with which the artists had to do battle.

“The festival is also about you, the audience, who, year after year, brave the rain, wind and security measures.” It’s therefore somewhat ironic that, this year, the rain and wind gave way to 36°C heat in the shade.The security measures, however, were in full swing.

For Viva Cité’s 30th anniversary, the ToNNe group used a trailer that can be transformed into a stage and a film studio to present the words of festival goers in strangely patched together films (sweding).This cinematic process owes its renown to director Michel Gondry, who dearly loves a touch of mockery… The colourful people in Colored Peopleby Ilotopie (Viva Cité, 2009) blend with ordinary people in a sort of short stop motion animated film, with the former represented by colourful wooden cubes and the latter by paper dolls, all set against a backdrop of a photo of the city. 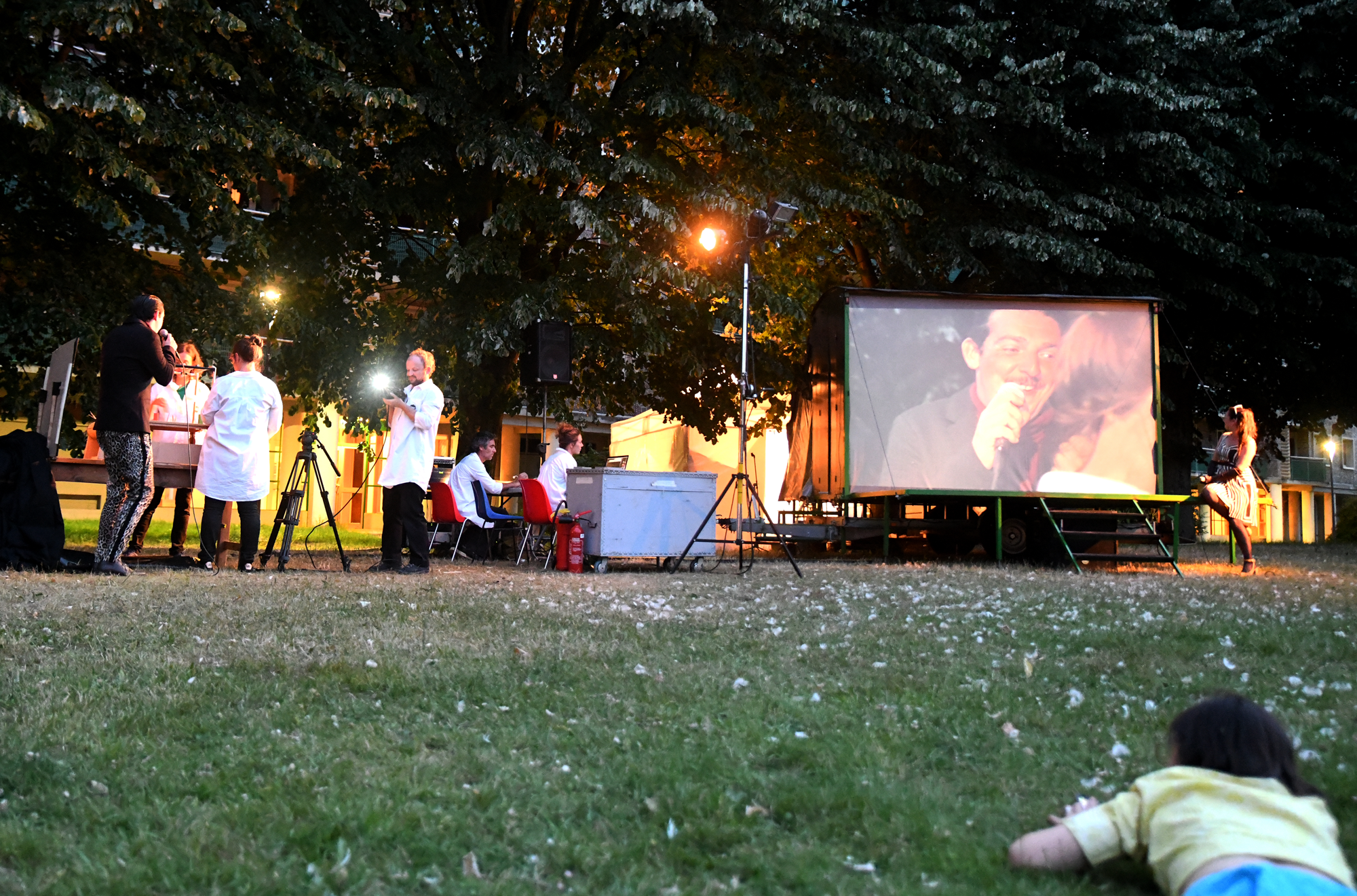 “We are the third generation of arts in public space”, says Mathurin Gasparini, graduate of FAI-AR and Artistic Director of ToNNe.

The first in the 70s-80s was the founding generation (some refer to them as “scrap men” due to the small proportion of women artists at the time).The second emerged at the turn of the 21stcentury, “with other technologies and perspectives”… The first were not necessarily characterised by a desire for revolution, but instead had “a fondness for celebration and large-scale performances”.All these profiles, sensitivities and artistic languages were part of this anniversary festival bringing together over 70 companies.As for the founder of ToNNe, he had trained with Transe Express, creators of the big performance at Place de l’Hôtel de Ville on Saturday night.

Place de l’Hôtel de Ville may have been newly renovated, but the heart of the festival was to be found in front of the residential blocks, sports ground and 10 hectares of underused “green space” in Espace Marcel-Lods, a neighbourhood with 1,139 residential buildings built on the rubble of the old city centre after the Second World War.This space was generally overlooked in previous editions, but featured around fifteen shows in 2019, as well as the Bar des Anges illuminated by Les Plastiqueurs, a great team of set designers backed by 800 volunteers!

Audiences relaxed on deckchairs or mats in an empty car park to listen to musicians from the Opéra de Rouen, who defied heatstroke on the balconies of the Gascogne building (Grand Ensemble by Pierre Sauvageot) or to enjoy the peaceful presence of Luke Jerram’s Museum of the Moon.This installation is usually accompanied with a soundtrack but was presented here in silence so as not to interfere with other performances. 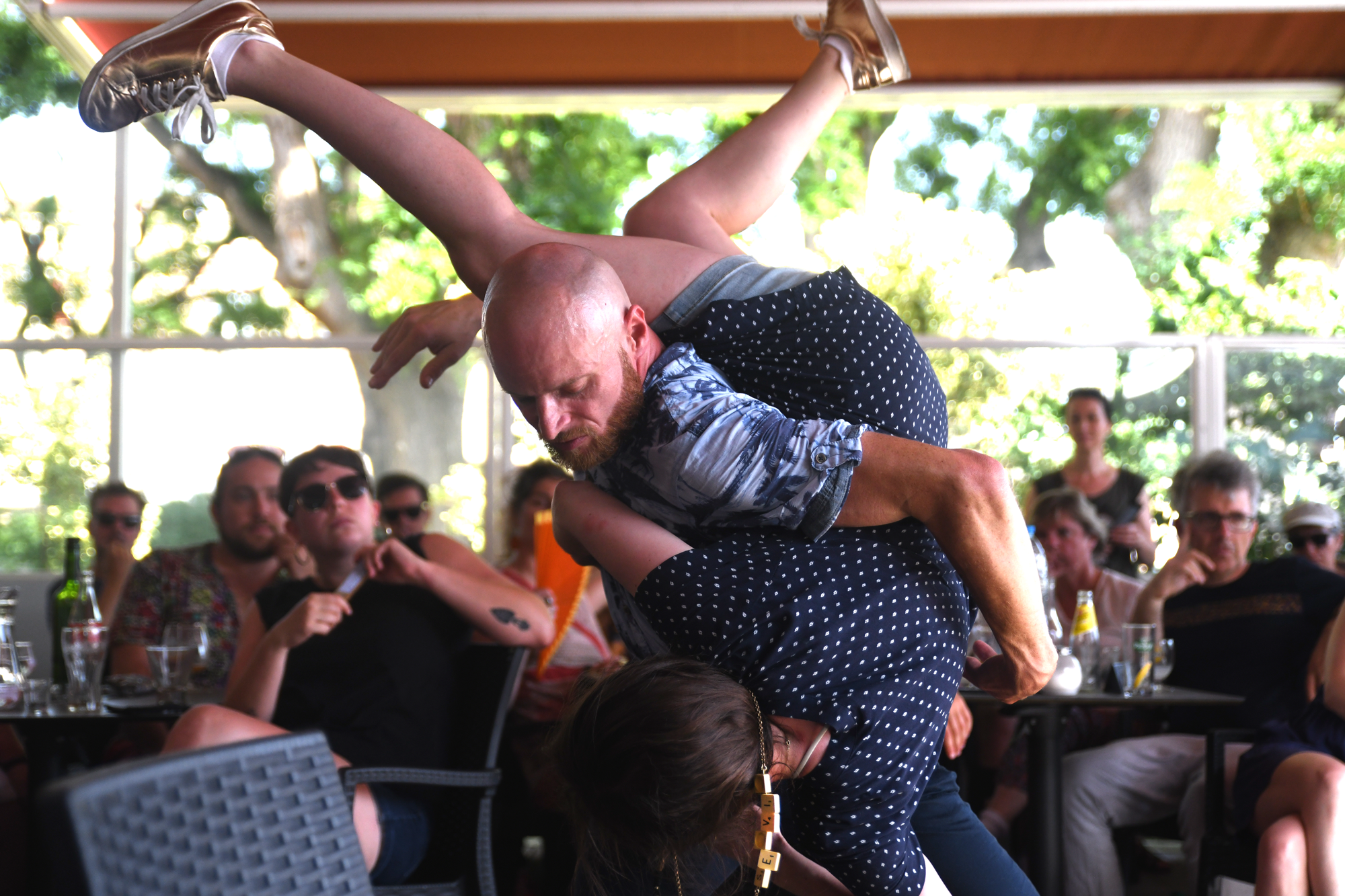 In a context of rising tensions in France (Yellow Vest movement from November to May, 1 May demonstrations violently repressed in Paris, the Fête de la Musique in Nantes that ended with a police intervention), Viva Cité 2019 was a welcome breath of fresh air… Much like three years ago at Viva Cité 2016, just before the van attack in Nice.The success of the event is no doubt due to the unique political context, but also thanks to smart staging, which cleverly disguised security systems as set design (municipal vehicles parked along the streets to block any crazy drivers, concrete blocks wrapped in fluorescent pink plastic wrap, etc.).“We wanted to avoid systematic security checks, which didn’t seem to fit with the party atmosphere”, explained dancer Lucile Rimbert, Director of Lu2, who performed at Le Rocher de Cancale, a bar on Place de l’Hôtel de Ville.En vieis a bitter performance, with a beautiful sound track, that addresses the difficult topic of alcoholism.

“2017 saw a big drop in the number of walking and large-scale performances”, recalled the artist. 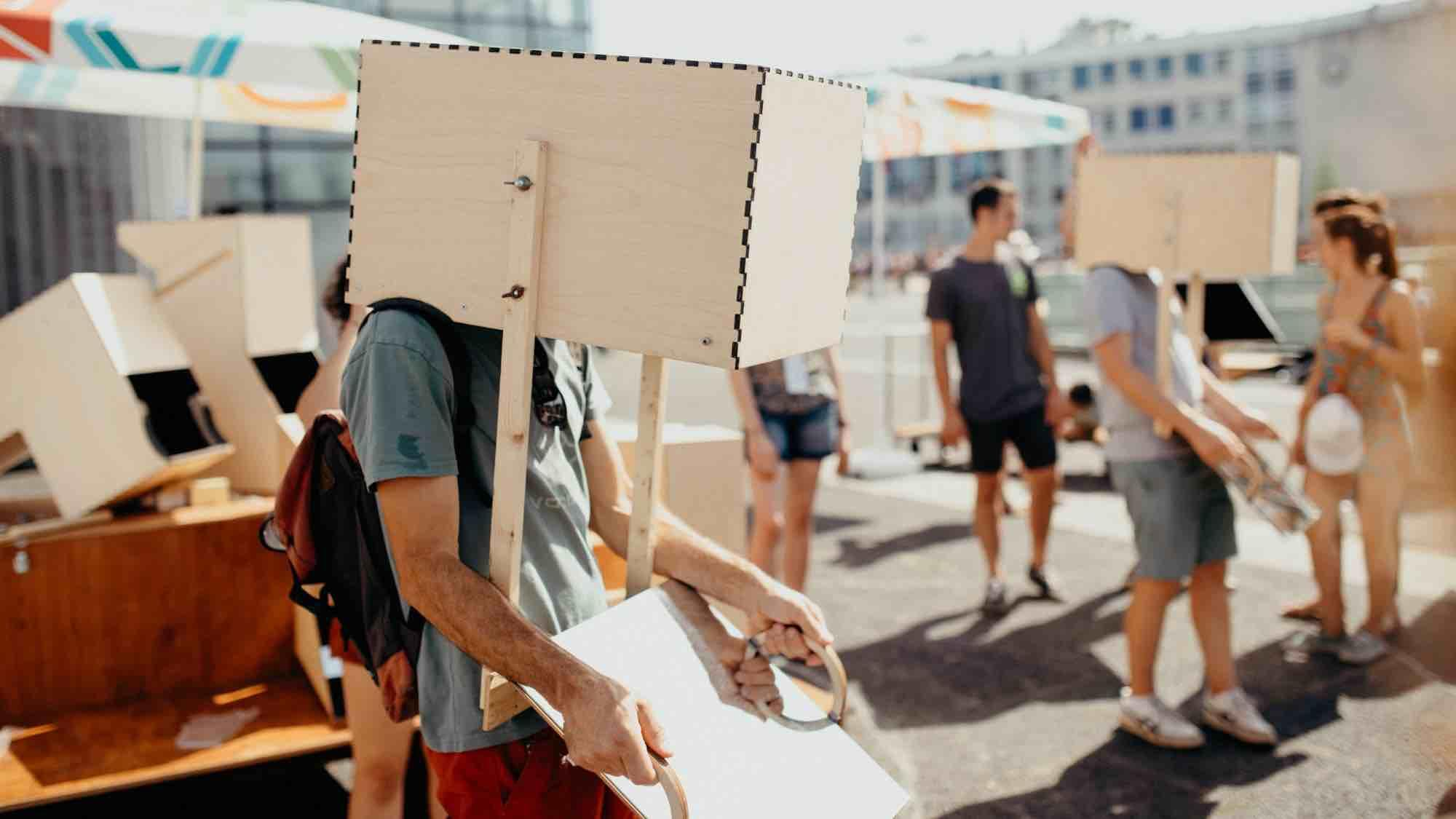 For this artist interested in directing the human gaze, the work in Sotteville was a trial in all senses of the term, like an industrial or print test.

The same was true for the black box “Inter-view” (a box fitted with a one-way mirror that “reveals” things that participants didn’t know about themselves and the person opposite), but it might not have been the best time of the day to fully appreciate the bedstead on wheels in “Micro-sphère”.

People then headed to the shady copses of Espace Marcel Lods to wait until evening and the concert by the Matzik company (Tranzistoir).Here, author and performer Claire Laurent took us on an ingenious stationary road trip, through this night-time excursion along the roads and radio waves in this pop-up radio (FMR), featuring a refreshing mix of sputtering and sound samples from four facetious musicians, in a blend of microphone performances, recorders bravely played with noses and “immerged saxophones”… This project came straight down the Rennes motorway out of the depths of the night. 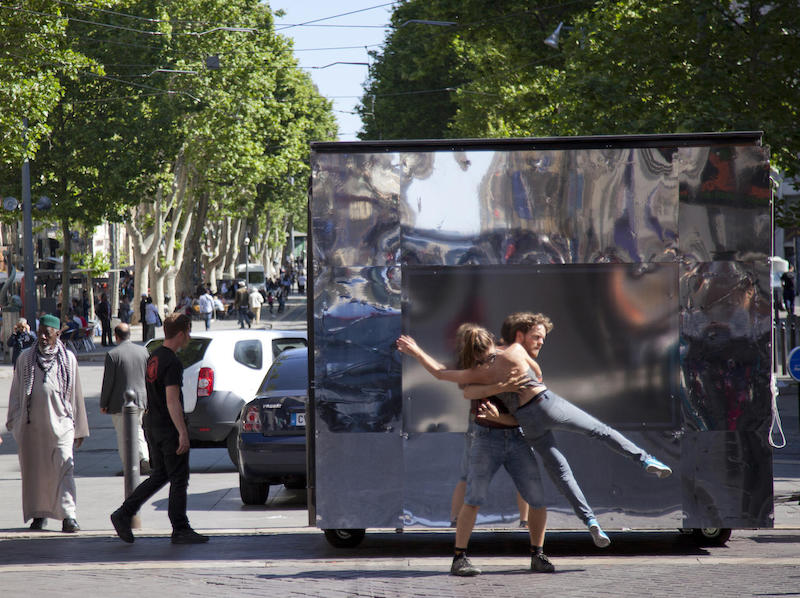 Since graduating from P.A.R.T.S., choreographer Benjamin Vandewalle has created exciting performances and interactions that play with observation and question our way of looking at reality. Besides his artistic activities, Benjamin teaches dance in KASK (Belgium) as well as in South Africa and Mozambic.