The street belongs to us 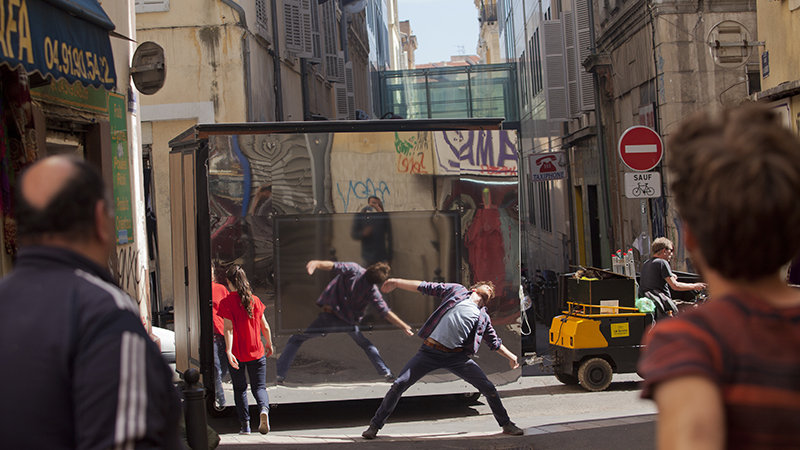 Neil Butler is the former head of UZ Arts, an independent organisation based in Glasgow (Scotland) that initiates a number of cultural programmes worldwide. Amongst other work, Werner Schrempf heads La Strada festival in Graz (Austria) which he founded in 1998. These two IN SITU network members’ directors provide together their account of art in public space today.

You have been working together in the European IN SITU network for over ten years.  The field of “street art”, as we call it in France – though the definition is not unanimously sanctioned –, has constantly evolved since the 1980s. What changes have you observed since the start of IN SITU?

Neil Butler – In fact, there have been different tendencies in different fields, always in relation to the public space. Towards the end of the 80s, I worked with many French street art companies. This type of theatre developed in France particularly,  but street art also  existed in other countries. In the UK, creative programming in the public space started in the 1970s, in particular with experimental  theatre companies and performance artists.  In the 1980s, however, circus and entertainment dominated. This had nothing to do with what was going on then in France, when you could discover high standard, sophisticated and exergue we went from a frontal educational process to the integration of the audience in the process of making ambitious work. Over time, things have set  a little. For artists or programmers, the focus has shifted, progressively moving away from  a theatre base towards the visual arts. A lot of the work shown today in the public space comes from visual arts, which can also include performance. There is also a significant movement that has come from land art and develops performances  in relation to landscape. Finally, artists increasingly tend to work with the audience. Either they start with that relation, or the public actively participates  in the making of the work or its execution.

Werner Schrempf – There are many more projects that involve the audience. I often  say that we went from a frontal educational process to the integration of the audience in the process of making.  Today, artists take into account the urban reality of the different cities  they work in a lot more. This means that we, as festival directors and more generally as programmers,  are also more involved  in the artists’ working process, especially when we commission not just the production of new work, but also a creation that takes on board local specificities.

Is this gradual shift from theatre towards  the visual arts central to your work?

Neil Butler – We meet many artists from many countries, in festivals or other contexts, and  we discuss the questions that concern us together. It is likely that by circling around these questions so much, something arose. We have refined our vocabulary, for example. It is a bit like the forty words in the Inuit language to say ‘snow’. Undoubtedly, on the one hand, there is a demand on our part for projects that are embedded  in a specific place – even if you can see them  in Marseille, Graz or Glasgow and imagine different adaptations each time – and on the other, artists who are interested in this sort of project.  The constant is this wish to involve the audience. Often, artists who had never considered such  a direct relation with the audience realise after all to what extent it has always been present in their practice.

Werner Schrempf – Austria considers itself  to be a great country for culture. Cities themselves are considered as cultural sites – like Vienna or Salzburg. Think opera, Mozart. And for those who are not interested, there is sport. In Graz,  for the La Strada festival, we have the following aim: establishing contact with the audience,  that is to say with the inhabitants of the city. This is one of the reasons why we turn to visual artists, amongst others, who imagine their projects according to the public space. For this, leaving the closed gallery space is very stimulating since it represents  a riskier challenge.

Would you say that one of the basic differences between a theatre and the street is that, in the street, the audience can’t choose? The artworks are there and they can take it or leave it…

Neil Butler – Yes, by passing it by, for example. It is in that sense that it is so important to take the audience into account. You can’t plan an artistic project in the street without considering the impact it will have  on the people who will be confronted with. In fact, the audience makes the work. Their imagination, interpretation, their decision to stay or move away must be components of the project. It is not so much.about attracting crowds. What captivates is the quality of the project. By the way, when we refer  to the participation of the audience, I want to insist on the fact that this also includes simply looking.

Werner Schrempf – There are different ways of involving an audience. I am thinking of the dance company Ex Nihilo, for instance. Their performances are so powerful that spectators are literally captivated  by what they are experiencing.

Surprisingly, projects in the public space often focus on intimacy. How do you explain that?

Neil Butler – This tendency first appeared  in the Netherlands, in Utrecht to be precise, in the context of the Impakt festival. There are indeed many works addressed to small groups working with the effects of proximity.  It turns out that this developed simultaneously in social networks. Artists grasped this phenomena and proposed works that use the new technologies and offer the chance to interrogate such personal intimate experiences. There are new tools that imply new fields to experiment with. Obviously, this is something we support.

Interview by Hugues Le Tanneur
This article was published in the coedition IN SITU, Lieux publics and Les Inrockuptibles, extra issue n° 960, April 2014